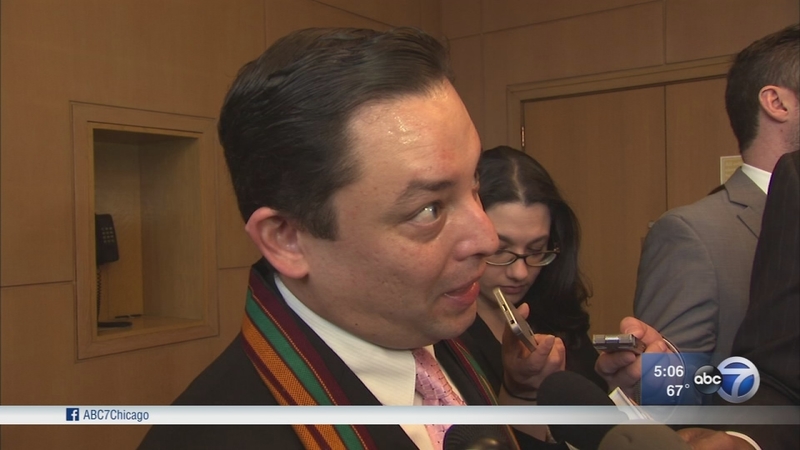 CHICAGO (WLS) -- Mayor Rahm Emanuel tweaked his plan to spend $15 million in unclaimed property tax rebate money, causing some aldermen to accuse one of their colleagues of giving into the mayor.

At odds yesterday, today freshman alderman Ray Lopez and Mayor Emanuel were suddenly on the same page. The southwest side alderman led the charge against the mayor's plan to spend $15 million of unclaimed property tax money.

But after Emanuel tweaked the plan Lopez was on board, leading some of his colleagues to believe the rookie alderman caved.

"If I got a sweetheart deal, I don't know it," Lopez said. "All I know is that my approach has been and always will be what is best for the entire city, and to put an end to violence in all our neighborhoods, not just mine."

The mayor's original proposal was to spend the small windfall on police body cameras, rehab vacant homes, after school programs and new trees for city parks. Lopez and others pushed to replace the tree money with violence intervention programs. The mayor agreed to lose the trees but replace it with anti-violence technology for cops rather than the intervention programs.

"At what point are we going to wake up and stop being obtuse about the problem of violence in our city?" asked 45th Ward Alderman John Arena.

"It seems like the administration is tone deaf to the fact that we need more street intervention to prevent violence," said 22nd Ward Alderman Ricardo Munoz.

Ald. Lopez agreed to the mayor's plan after the mayor promised to earmark future grant money to intervention programs.

"It's an initial down payment in our efforts and I'm not going to stop trying to find resources to enhance the public safety of our neighborhoods and communities," Emanuel said.

"I'm taking the mayor at face value that we will continue to work together, as we all should do, to try to address violence," Lopez said.

The Emanuel administration said it plans to apply for a grant that could be as much as $45 million for violence prevention. Lopez said the mayor also promised to find another $1 million in the budget to pay for a violence interruption program. That money is needed in the city to replace funds cut by the state.

The small sign above an inner street in Humbodlt Park through the heart of Chicago's Puerto Rican community is just a few inches long, but the name that will soon be on it bears a deep and painful history.

But Joe Connor, a New York City businessman, doesn't see it that way.

"My father was murdered by the FALN. Oscar Lopez was a member of the FALN, leader of the FALN. He is a terrorist and Chicago is honoring him," Connor said.

Lopez Rivera just walked out of federal prison after former president Barack Obama commuted his sentence. He spent 35 years in prison after convictions related to 29 bombings and weapons charges committed by the Puerto Rican nationalist group.

"The conviction he got was seditious conspiracy. Guilt by association," Maldonado said.

The honorary street will stretch three blocks. Connor can't believe it passed at all.

"It's twisted, it's upside down," Connor said.

"This honorary street is a little thing that we're doing for him in the Puerto Rican community," said Maldonado.