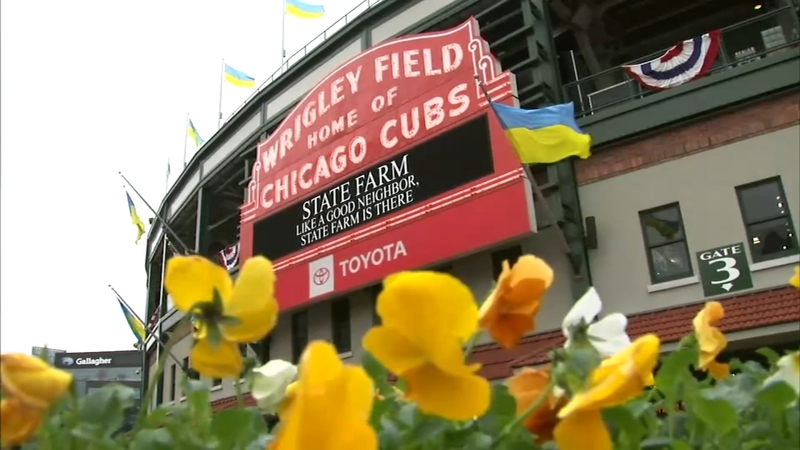 MLB Opening Day 2022: Cubs welcome fans back to North Side

CHICAGO (WLS) -- The Chicago Cubs opened their season Thursday at Wrigley Field, and fans were ready to resume their traditions - despite the winterlike weather.

Cubs fans haven't seen their favorite team take the field at Wrigley since the last week of September in 2021.

And, although the club is not expected to be playoff contenders, there was still a lot of excitement on the North Side as the Cubs took on the Milwaukee Brewers.

This was the 18th consecutive opening day for Cubs fan Andrea Richardson and her kids.

"My kids have been going to every opening day since they were born and we had to keep up with the tradition," Richardson said.

The festive atmosphere of opening day is what memories are made of. Before the game, parents played catch with their kids as friends played a tense game of Jenga on the plaza.

In Wrigleyville, fans jammed into Yak-Zies for a live radio broadcast.

"Opening Day is our entire year," said Joe Spagnoli, of Yak-Zies. "It's a springboard to what the summer is gonna be like."

But it's definitely not summer yet. August Liesse, 92, knows how to dress for spring baseball in Chicago.

"I got four layers on top and bottom," he said.

Inside the park there, was a serious moment before the game as they sang the Ukrainian national anthem.

Cubs Executive Vice President of Sales and Marketing Colin Faulkner joined ABC7 Chicago Thursday to talk about the first full Opening Day in years, due to the COVID pandemic.

The Cubs open their season Thursday at Wrigley Field.

"It's really exciting! I like to be back. It's like back to normal. It's really fun," 14-year-old Cubs fan Caydence Luke said.

The Cubs are also using the hashtag #ItsDifferentHere, as they welcome lots of new players with open arms, Faulkner said.

Only bags smaller than 16 x 16 x 8 inches in size are permitted this season, and exceptions will be made for medical bags and diaper bags that accompany guests with young children. Backpacks are prohibited.

Menus have expanded at Wrigley Field to include these new dishes:

All food and beverage orders can be placed through the MLB Ballpark app or a scanned QR code located throughout the ballpark and are cashless, Cubs Senior Vice President of Communications Julian Green said.

The Cubs open their season Thursday at Wrigley Field.

Half of the net proceeds from the Opening Day raffle will be donated to the International Federation of Red Cross (IFRC), which works to support the millions of Ukrainians in need and other Chicago-based nonprofit organizations working directly with Ukrainian refugees in the Chicagoland area.

Fans across Illinois can purchase tickets for the Cubs Charities 50/50 Raffle online starting at 11 a.m. until the end of that day's game or through a Raffle Ambassador at Wrigley Field when gates open until the bottom of the eighth inning.

For all Cubs home games this season outside of the special Opening Day raffle, the winning ticket will receive half of the net proceeds from the game's raffle ticket sales and the other half will benefit Cubs Charities and its mission to mobilize the power of sport to champion youth, families and communities. Cubs Charities also will be hosting its first guaranteed jackpot Saturday. For more information on the Cubs Charities 50/50 Raffle, visit www.cubs.com/raffle.

The Cubs' opening homestand will include a four-game series against the Brewers.

Luke and his fellow fans were up and at 'em early Thursday.

"Play hard! Make it exciting a little bit. Stay in some games. Keep us coming out for a reason other than to come to a ballpark," he said. "It's just cold! It's a little cold today."

But rain or shine, the Cubs hope their fans will help see the team to victory.

"I'm just happy to have baseball back here. We're on the corner of Addison and Sheffield, right by the Dugout bar, and this is where I always come to get my tickets because they give you the best deals over here," Cubs fan Mark Savidge said.