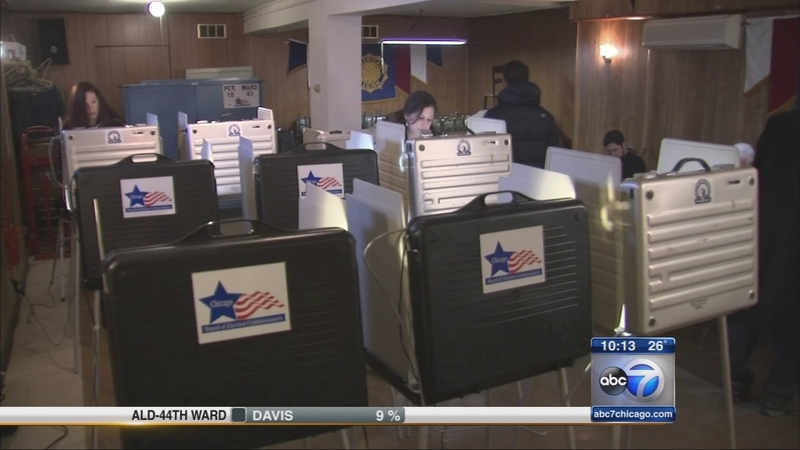 CHICAGO (WLS) -- As the mayoral and several aldermanic races go to runoff elections, reports of low voter turnout at this year's polls may have been a contributing factor.

The numbers show one thing very clearly for Mayor Rahm Emanuel - he lost 1/3 of his support from when he won in 2011. It appears that the record-low turnout was a key factor in this.

About 33 percent of voters showed up at the polls Tuesday, which is close to a record-low for a municipal general election.

While voter turnout was low on Election Day, the number of people who voted early rose 23 percent from four years ago.

The Chicago Board of Elections extended voting hours to 8 p.m. at four precincts after late starts Tuesday morning due to no-show judges. The following polling places were affected:

"It was between 5 a.m. and 6 a.m. when I got here. So by the time I got here, unfortunately, nobody showed up," said Angela Marshall in the 48th Ward.

Other polling places throughout the city had similar troubles, although voting hours at those locations were not extended past 7 p.m. In the city's East Garfield Park neighborhood, four judges - all with prior election experience - did not show up. And in the Lawndale neighborhood, another three judges failed to make it to the John Gregory School polls. Only a few voters left without turning in ballots because judges weren't ready to take them right at 6 a.m.

Election officials said these cases of no-show judges are not as grave as the situation voters saw in November, when election judges were absent in larger numbers.

Rosemarie Maher was determined to vote. She made three other stops before she found the right precinct location where she was assigned - but she made it.

"I think it's important, I've lived in the city all my life, I love the city and I want what's best for the city," Maher said.

In addition to the low turnout, 40-50 voters were turned away Tuesday morning at the 15th precinct in the 41st Ward because two judges failed to show up. They opened about two and a half hours late. Lloyd Hanson was the only scheduled judge here, and three election judges are needed for each polling place.

"Find people that want to volunteer on the spot, luckily I got two fine people, so everything is working fine now," Hanson said.

Next door, Brian Timmreck got a call early Tuesday morning to be a fill-in election judge in the 37th precinct. They opened about an hour late, and turned away about 20 voters.