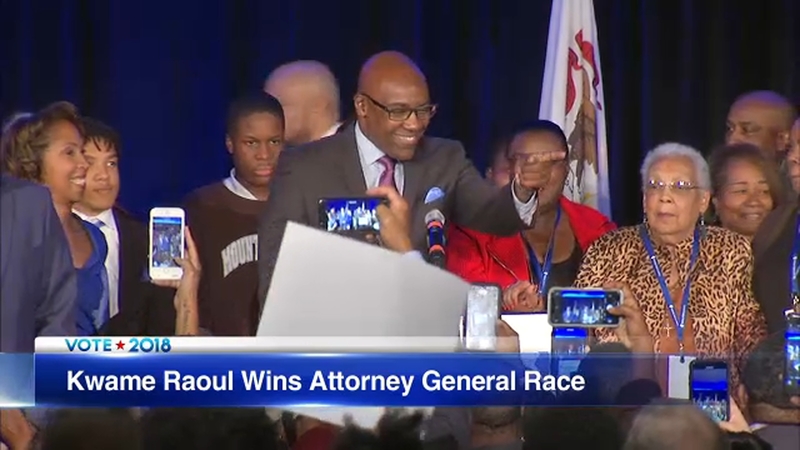 CHICAGO (WLS) -- Democratic State Senator Kwame Raoul in the race of Illinois Attorney General Tuesday night. Republican challenger Erika Harold called him to concede the race about an hour and a half after the polls closed.

The two had been locked in a tight race, with polls narrowing in the days before the election.

Raoul had garnered about 61 percent of the vote when Harold conceded. She said she will be rooting for him to do an exceptional job as attorney general.

At the Fairmont Chicago, Raoul was introduced by current Illinois Attorney General Lisa Madigan, and was emotional during his speech. He talked about his father passing away several years ago and his own battle with cancer, and reminded the crowd that it was on this day 14 years ago that he was appointed to the State Senate to replace U.S. Senate-bound Barack Obama.

After his speech, Raoul reflected on his new role.

"More important that the competition between Erika Harold and I was this notion that the role that attorneys general play right now, collectively, not only for the citizens of the state of Illinois, but for all Americans," he said. "Attorneys general have stepped up to be the last line of defense and I'm glad to be amongst them."

Senate President John Cullerton released a statement congratulating Raoul, saying, "Kwame Raoul is going to be a terrific attorney general for the people of Illinois. His work in the Senate has shown him to be a keen negotiator and fierce advocate. It's been my honor to work with him, and I look forward to his leadership as attorney general."

Harold was hoping to make history on her own accord, as the first black female attorney general, but it was not to be. She said shortly after the polls closed it became clear that things weren't going to go her way, so she wanted to concede early.

At about 8:30 p.m. she took the stage in front of an intimate crowd of hometown supporters to say she had just called Raoul to congratulate him and concede.

Harold positioned herself as someone who would go after public corruption, and as an independent check on the Pritzker-Madigan agenda. The Harvard Law School graduate said she was proud of her campaign but also disappointed overall.

"I wish the race would have focused more on issues and I hope that going forward campaigns will focus more on issues, because we need good people to run for political office, and if people feel that their family will be negatively impacted, or that civility will not be upheld, it might be an impediment to more people entering," she said.

Harold said she will now return to practicing law, and while she has no immediate plans to run for another political office she wouldn't rule it out in the future.

Political observers said the race would boil down to turnout and to how many voters chose to split their vote between Democrats and Republicans.

Both Harold and Raoul were in Chicago earlier on Election Day. Harold spoke with potential voters at Union Station before heading back to Urbana, where she is from, to watch the returns with her supporters. Raoul made the traditional Election Day stop at Manny's Delicatessen and voted at his local polling place.