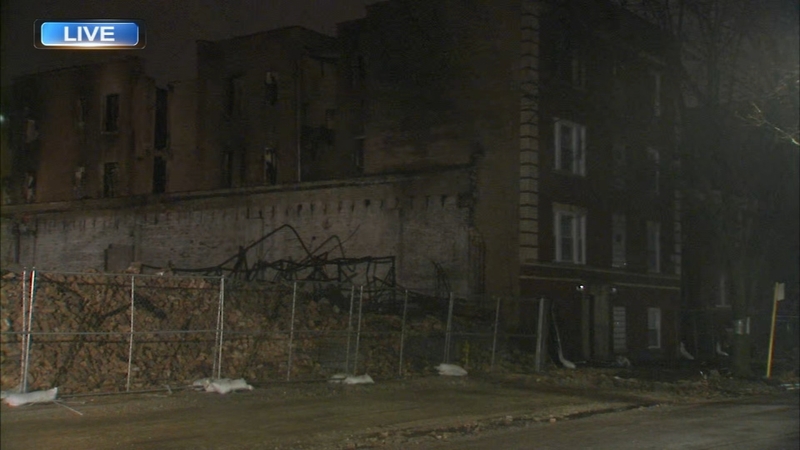 The blaze spread to multiple buildings in Albany Park on the Northwest Side Monday morning, leaving one man seriously injured, the Chicago Fire Department said.

The fire started at about 3:30 a.m. in the 4300-block of North Richmond Street and spread to multiple buildings, including a residential building, the Twisted Hippo brewpub and the Ultimate Ninjas gym. Neighbors said the gym and the brewpub have been destroyed by the fire.

The Chicago Fire Department said a 60-year-old man was transported to the hospital in serious condition with smoke inhalation.

There was a partial building collapse, with some rubble falling on nearby vehicles. Neighbors heard and saw explosions, which the owner of Twisted Hippo said was likely caused by their carbon dioxide and nitrogen tanks.

"We were right in our front window," said neighbor Brian Pudil. "We could see it, and we could feel the impact. It was so big."

The Twisted Hippo taproom and eatery owner was devastated by the sight of her business burning.

"It's a little unreal," said Twisted Hippo owner Marilee Rutherford. "It's hard. It's going to be hard, but we are lucky to have had it, and we will see how we move forward."

Twisted Hippo opened in January of 2019 at a site where three other breweries had opened and quickly closed.

As one of the outside brick walls at the Twisted Hippo collapsed and crushed cars, a next-door business was also burning, Ultimate Ninjas Gym. Its President's Day camp for kids was sold out.

"We love Chicago, we love what we do for the community, but it's gonna be hard to figure out what to do at this point," said Jeff Piejak, Ultimate Ninjas owner. "It's just all up in the air."

"It's really difficult to see," neighbor Vanessa Peña said. "This is a local business that has been a staple in the neighborhood."

"I lost everything. That's it. I have everything that I own on my back. Everybody here in the building lost everything because they are not going to let us back in for a while and even if everything didn't get screwed up by the fire, all of the water damage is going to do in everything else," said building resident Michael May.

"I do have work today, and I work from home," said resident Jason New. "Now that I'm homeless, I don't know what is going on."

The cause of the fire still being investigated, but the fire department said it appears to have started outside in a gangway underneath wooden stairs between the commercial and residential buildings. But officials stopped short of calling the fire suspicious. The cause is still under investigation.

Some residents said the fire started in a third-floor apartment, but the apartment's landlord, Gary Carlson, said it did not.

"There's no way that that fire jumped from my building to the Twisted Hippo building," Carlson said.

He cited a text message from one of his tenants, saying: "I got there before the building caught fire. The bar next door was on fire, then 4339 N. Richmond caught fire."

4339 N. Richmond is the address of Carlson's residential building.

Carlson has a history of code violations at dozens of properties he owns in the area.

Public records show he was under an order to fix electrical problems at the building. A permit for the work was obtained in January, but it was unclear if the work was completed and inspected.

Displaced residents who gathered on the street and watched their homes burn complained about trash and rowdy neighbors at the building. A state legislator said he had a "bad feeling" about the building.

"It's all about a landlord being guilty until they prove themselves innocent, right?" Carlson said. "As a landlord in the city of Chicago, guilty until you prove yourself innocent instead of the opposite way around. Thou shalt not bear false witness against your neighbor."

He added that the brewery "had the highly flammable materials in there. I don't blame anybody. But why are they blaming me?"

Chicago Fire Department Deputy District Chief Tom Carbonneau said Monday morning the fire had been struck out, after firefighter battled it for hours. Crews remained on the scene to put out any hot spots and clean up.

"The Building Department is gonna come out, and this building will have to be knocked down for the safety of everybody," Chief Carbonneau said. "The front right now is still bowing out right now, so the front of that is going to collapse eventually or get knocked down."

Carlson said he was told the city may order his building torn down, though to him it looked like it was "perfectly salvageable."

He said he was thankful that nobody was hurt and sorry that families were suddenly left homeless. Carlson insisted that he always responded to any issues tenants and neighbors brought to his attention.

A GoFundMe page has already raised more than $100,000 to help the Twisted Hippo Brewpub rebuild.

Across the street at Montrose Saloon, neighbors raised a glass Monday night.

"We figured we'd come out, have a beer, and, unfortunately, come see the damage and see what it looks like," Albany Park resident Armin Suljevic said. "And that's when it really hits you just how bad it is."