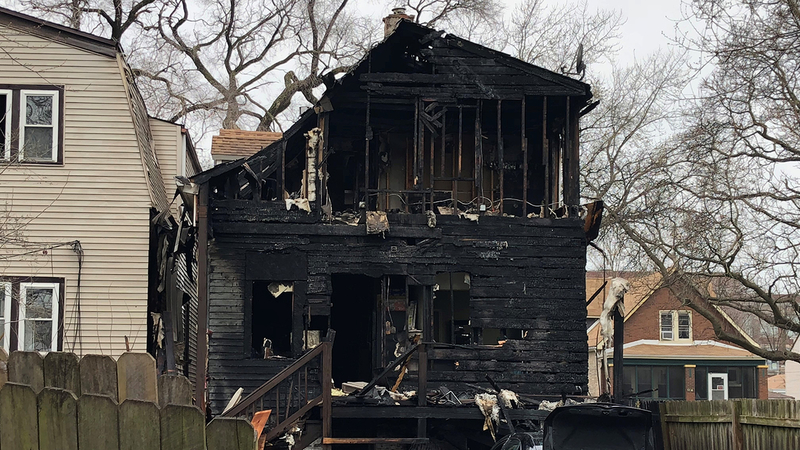 CHICAGO (WLS) -- An explosion at a steel plant rocked a South Side neighborhood Wednesday morning and debris from the blast ignited a fire at a home a few blocks away.

The Chicago Fire Department responded to a report of a blast in a slag pit at Finkl Steel in Chicago's Burnside neighborhood, near East 93rd Street and South Kenwood Avenue. Slag, or hot metal, is a by-product of steel making.

Finkl Steel officials said slag is supposed to be placed on dry ground. But when it made contact with water, there was an explosion that sent the hot metal flying into the air.

The burning debris landed on nearby Naylor Pipe Company and ignited a fire at a home in the 9100-block of South Woodlawn Avenue.

The house was evacuated and the fire was extinguished. The two-story home sustained heavy damage in the back of the structure and pieces of debris could be seen burned into the ground nearby.

"I heard the explosion. I looked out the window and seen a lot of smoke, you know. I see pieces of debris still in the air, like ashes coming down," said one of the victims displaced by the fire who did not want to be identified. "It was nothing but pure smoke, so I had to get up and wake everybody up out of the house."

One firefighter suffered a cut to his hand during the response and was transported to Advocate Trinity Hospital for treatment. No one else was hurt.

Finkl officials said the family in that home was displaced and they are helping them get into a hotel, as well as with food and supplies. The American Red Cross is also assisting.

"I lost my whole house, my car. I don't have any belongings at this point in time," the fire victim said.

The president of Naylor Pipe Company said this is now the second time an explosion at the steel plant has caused them damage. The first time was back in November 2017.

"It was about $150,000 in damage, this time I'm not sure. I'm thinking it's going to be more because of the fact, we also have windows in the back and as the explosion came it knocked some of the windows out," said John Czulno, president of Naylor Pipe Company.

Czulno said he hopes this time the company will make the right changes.

"If you take a molten piece of metal and the chunks that weigh very heavy, it could kill somebody easily. It needs to be addressed," he said.

A second home was damaged by the burning debris, officials said, but that damage was minor.