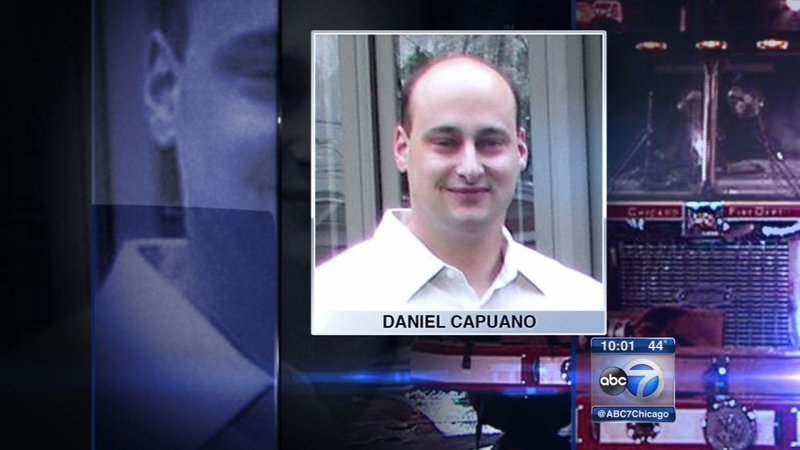 CHICAGO (WLS) -- A Chicago firefighter died when he fell through an elevator shaft at a burning warehouse in the city's South Chicago neighborhood.


Daniel Capuano, 42, died after falling from the second floor of a warehouse in the 9200-block of South Baltimore Avenue, Chicago Fire Commissioner Jose Santiago said. Capuano was honored with a procession outside Advocate Christ Medical Center in Oak Lawn.

"Unfortunately this is an incredibly dangerous job, unpredictable by all measure. This is a perfect example about that, today," President of Chicago Firefighters Union Local 2 Tom Ryan said.

The Chicago Fire Department was called to the three-story structure around 2:40 a.m. Firefighters reported heavy smoke throughout the second floor, where crews were searching for the heart of the fire.

"As firefighters went in there, they saw some holes throughout in the floor. They gave out an emergency alert, 'Be careful.' It looked like the firefighter, Daniel, had just walked into the elevator shaft as he was searching for the seat (of the fire) and fell," Santiago said.

Santiago said a "mayday" call, signaling a firefighter in distress, was sent out around 2:56 a.m. Capuano was found a short time later.

First responders performed CPR on Capuano at the scene and rushed him to Christ Hospital. He was pronounced dead at 4:25 a.m.

Capuano, a firefighter/paramedic assigned to Tower Ladder 34, was a 15-year CFD veteran. He previously worked as a firefighter in south suburban Evergreen Park. Just last year, Capuano was first on the scene when Jamie Harris was shot at a bus stop.

"He stuck with me all the way. Went out of his way. He did an extraordinary job," Harris said.

When firefighter Chris Bolden last saw his friend and co-worker, it was Sunday morning when Capuano relieved him on Tower Ladder 34.

"Dan passed away doing what he loved doing, and that's helping others and saving people. So, you know, he's a hero in my book," Bolden said.

Capuano was a well-liked hockey coach for a traveling team in southwest suburban Alsip. Two of his sons played for the team, which posted a message of remembrance on its website.

"A lot of these kids have worked with him for the last year. I mean, most of this organization is family people, so it's one of those things where it's really, it's really hard to see," said A.J. Hernacki, Capuano's friend.

"We hope you can keep the Capuano family in your prayers and the department members who worked with him," Santiago said. "This is devastating to the family."

BMO Harris Bank has established a memorial account to benefit the family of fallen Chicago firefighter Daniel Capuano. All BMO Harris Bank locations are currently accepting check and cash donations from customers and the general public, with donation funds supporting Daniel's family. Checks can be made payable to the Daniel Capuano Memorial Fund.

"Chicago has lost one of its bravest in Dan Capuano. As a 15-year veteran of the Chicago Fire Department, Dan spent his career putting the safety of others ahead of his own. He made the ultimate sacrifice so Chicago's residents could be safe. For that, there are no words that can truly express our sorrow for his loss nor our gratitude for his service and sacrifice to the City of Chicago. The thoughts and prayers of a grateful city are with Dan, his family, and his fellow firefighters at this difficult time."

The fire was extinguished by around 3:45 a.m. The building was under renovation, and officials have determined "there were no protective barriers" to protect Capuano from falling. The building's owner said no work was being done on the elevator shaft.

As the investigation continues, firefighters from Engine 72 are reminded of the realities for these first responders who run in when others are running out.

"We kinda forget the danger that's lurking out there. Any given day, we can go to work and not come home," Bolden said.

Chicago Fire Department spokesperson said that had there been a barricade in front of the open elevator shaft, this accident would not have happened.