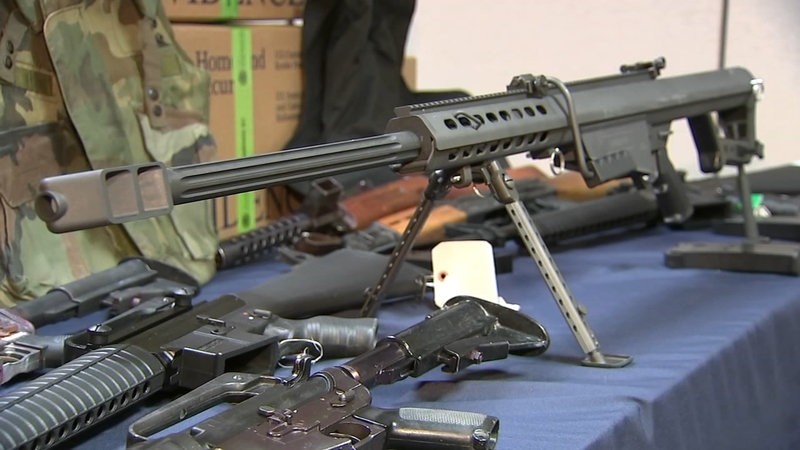 In last month's battlefield in Culiacan, Mexico connected to the arrest of El Chapo's son, the combatants were armed with heavy weaponry of an ongoing cartel arms race. The I-Team has uncovered that that arms race now stretches to Illinois.

The I-Team first uncovered cartel-linked weapons in a 2018 investigation that linked suburban gun sales to a transnational cocaine ring run by a drug cartel called 14 Brothers. Federal agents uncovered a stockpile of 31 weapons in a suburban storage unit that were packed and ready to head south.

Robert Melone with Homeland Security Investigations showed investigative reporter Chuck Goudie the weapons recovered in the storage unit raid, and pointed out one of the .50 cal Barrett rifles they found -- the same rifle spotted in video from the October Sinaloa raid.

"What kind of damage does this do in close confined urban settings?" Goudie asked.

"This does a lot of damage," Melone answered. "It tears the vehicles apart, as you can see in those videos from El Chapo's son."

This drug cartel obtained these weapons through a scheme called straw purchasing. That's when criminals get people with clean backgrounds to buy guns on their behalf, skirting federal law.

"They can do it legally and they won't attract attention, and they can pass them off to whoever's willing to pay," said Matthew Siffermann, Homeland Security Investigations. All of the straw purchasers linked to the cartel storage unit scheme pleaded guilty to their roles in the gun ring.

Straw purchased guns from out of state are increasingly turning up at headline making crimes in Chicago, from the murder of Chicago Police Department Commander Paul Bauer to the 28-year-old woman randomly shot in the back in the Fulton River District at lunchtime.

The ATF traced 10,504 crime guns in Illinois last year and are increasingly finding criminals using different straw purchasing schemes to flood the street with guns. Data obtained by the ABC7 I-Team shows half of the guns recovered in Illinois come from other states and more than 1,500 guns traced to sales across the border in Indiana.

WHERE DO ILLINOIS GUNS COME FROM?


"They will find a way to get those guns," said Tim Jones, ATF Chicago Special Agent in Charge. "The sad reality is guns in Chicago have been purchased in 48 other states that have ended up here and then been recovered as result of crimes."

Federal investigators recently uncovered multiple Indiana-based schemes designed to supply Chicago streets with illegal guns. In one, agents say they discovered a Chicago street gang paying a homeless man named Dakota McCeader, who had a clean background, $75 to $100 for every gun he bought in Northwest Indiana.

In all, agents say he bought the criminals 27 guns, but only a fraction have been found. McCeader pleaded guilty and is in federal prison. His attorney did not respond to a request for comment.

"There's still 16 of his guns out there?" Goudie asked.