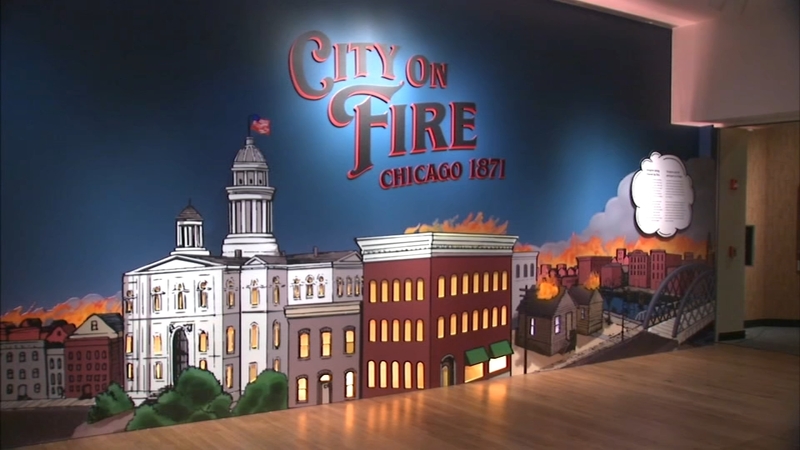 'City on Fire' assistant curator on visitors: 'they'll get a sense of fleeing the fire itself'

CHICAGO (WLS) -- The assistant curator for the Chicago History Museum's "City on Fire" exhibit said visitors will "get a sense of fleeing the fire itself."

Chicago was the fastest-growing city in the world when the Great Fire tore through three square miles in October 1871. Around 300 people died and 100,000 people were left homeless. Assistant curator Julius L. Jones described walking through the new Great Chicago Fire exhibit 150 years after the tragedy occurred.

"Imagine being chased by fire. That's what it was like. It's like having a large fire and it's chasing you and in the context of being chased, you have to make split-second decisions," Jones said. "We really wanted our visitors to get a sense of what the city that burned was like before the fire. From there they'll get a sense of fleeing the fire itself."

When visitors first enter the exhibit, which opens Friday, they can see how weather played a role in the fire.

A severe lack of rain for months made the city a tinderbox. Most buildings were made of wood and roofs were made of tar or flammable shingles. Roads and sidewalks were planked with wood.

Visitors can also get sense of what it was like as people fled for their lives.

They can view artifacts like porcelain baby doll heads left behind as children fled the fire. One featured item is a bucket of nails fused together, something that could only happen if temperatures rose above 1,000 degrees Fahrenheit. The illustrations and pictures of the devastation take visitors back to that moment in time.

Jones added that the exhibit speaks to the aftermath of the blaze and the inequity it revealed.

The O'Leary family, the Irish immigrant family blamed for the fire, is featured alongside the infamous myth of their cow kicking over a lantern. That tale was proven false decades later.