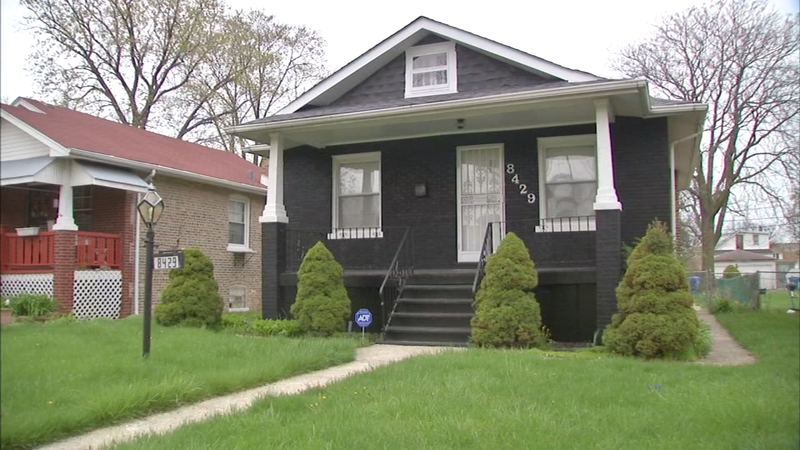 CHICAGO (WLS) -- A Chicago woman said she listed her Chatham home for sale, but, shortly after, a stranger moved in and is refusing to leave.

Danielle Cruz said she was proud when she bought this home and even prouder after renovating it. She was excited to sell it. But a stranger moved right in. When she called police, they told her there wasn't much they can do.

Now she can barely stand to look at the property.

"It just brings back nothing but bad energy for me," she said.

Cruz said last month a contractor came to repair her vacant Chatham home and noticed someone inside. She was told all of the locks had also been changed.

"We honestly thought he was joking because we knew the house was vacant. My husband just repaired the house completely with his own money," Cruz said. "So, we show up with the cops, and there's a young woman in there with all of her belongings."

Cruz said the woman told police she saw an ad for the home online, signed a month-to-month lease with a so-called landlord, and paid $8,000 up front.

Cruz said she's never met this woman, nor did she lease her property to her. She hoped the police would ask the woman to leave, but, because she showed officers a lease, it's a civil matter.

"They said unfortunately they couldn't prove she was trespassing. We have to go to court and follow the eviction process," Cruz said.

Cruz's neighbors were eager to chime in about the situation.

"Well it's disgusting. It's stealing and it's not right," said Chiron Baux, a neighbor.

"No one wants to come back and someone is living in a property," said Quintara Smith, another neighbor. "It's frightening. I mean, that can happen to anybody."

"I definitely do feel violated," Cruz said. "Like I said, we may not live here, but it's still our property. You know, I own this house, and it feels like if anyone can just break into your house and kind of take over. That's a scary feeling."

But as bizarre as the story is, it's not uncommon.

"This is not the first time I've heard this before. Unfortunately, it's becoming more and more common," said Mo Dadkhah, a Chicago real estate attorney.

Dadkhah said two scenarios are possible: First, someone could have broken into the home, pretended to be a landlord, and rented it out fraudulently. Or, the person inside moved herself in, created a bogus lease and presented it to police.

"So, generally speaking, squatters have to figure out a way to show some sort of residency," Dadkhah said. "So I've heard a variety of stories -- forged leases with the landlord's name. I've seen forged leases with realtors' names."

"But if somebody gets into the property in the middle of the night, nobody sees them get in the property, they have a lease in hand," he added. "Well, a police officer can't determine; they're not a judge -- that's a fake lease, or that's a fake signature, or it's forged."

He said in most cases, as in Cruz's, police will refer homeowners to the Cook County eviction courts, which are currently very backlogged.

A Chicago woman said she listed her Chatham home for sale, but, shortly after, a stranger moved in and is refusing to leave.

But there is another option for homeowners to consider: cash for key.

"And although it's a difficult pill to swallow to give money to somebody who is unlawfully in your property and refusing to leave, you have to think that $1,000 or $2,000, or whatever that number is that makes them leave, is less expensive in the long run," Dadkhah said.

Cruz said she'd be willing to negotiate and work something out with the woman, but the woman hasn't been willing to speak with her.

"You know, we're trying to live the American dream," Cruz said. "They say own property, you know, we are trying to provide for our family. And then this happens, and it almost makes you never want to own anything. It's not worth it."

The Chicago Police Department said only the Cook County Sheriff's Office can carry out an eviction, and the sheriff's office said only police can establish if a law has been broken, which didn't happen in this case. So Cruz will have to take the woman to court and wait to sell her home.

To prevent this from happening to you, legal experts advise that you consistently check on your vacant property, install cameras and call police the moment you see someone breaking into your home, and ask neighbors to call you if they see anything unusual happening at your property.

The I-Team contacted the woman living in Cruz's home, who said she'd have her attorney respond, but that never happened.

The Sheriff's Office is responsible for removing people from their home when they fail to pay their rent or mortgage. There is a clear civil process that individuals follow when that occurs. When someone breaks into a home that is up to the local police department to establish the law they violated and pursue that as a criminal matter.

Officers responded to a call of criminal trespass at a residence at the above location. Upon arrival, the owners of the residence related an individual was inside the home. Officers made contact with the individual inside the residence who related she met with an unknown male who claimed to be the landlord of the residence. She also related she had signed a lease and paid a deposit prior to receiving keys to the residence from the individual claiming to be the landlord. Responding officers advised the owners of the home of eviction procedures.
Report a correction or typo
Related topics:
chicagochathamhousingevictioni teamsquatterrentshousing marketvacant buildingreal estaterenters
Copyright © 2022 WLS-TV. All Rights Reserved.
I-TEAM
Plainfield family almost loses $11K in 'grandchild scam'
Understanding NFTs and how to avoid scams before you invest
Daily Harvest responds after customers sickened, hospitalized
Online auction scams: Don't be swindled on bids for big-ticket items
TOP STORIES
4th of July fireworks displays across Chicago area | See full list
Man critically injured in CTA Blue Line train stabbing: CPD
Spike in mass-overdoses, teen deaths due to fentanyl, DEA says
Plainfield family almost loses $11K in 'grandchild scam'
Gov. Pritzker outlines grocery, gas tax relief
Boy, 14, killed, another teen injured in Bronzeville shooting
Car crashes into home after fleeing attempted traffic stop: CPD
Show More
Texas woman accused in cyclist death arrested in Costa Rica
Chicago Weather: Scattered storms Friday
2 charged in Boston bar murder of Chicago area Marine arraigned
FCC asks Apple, Google to block TikTok from app stores
Cruise ship hits iceberg in Alaska, returns to Seattle for repairs
More TOP STORIES News