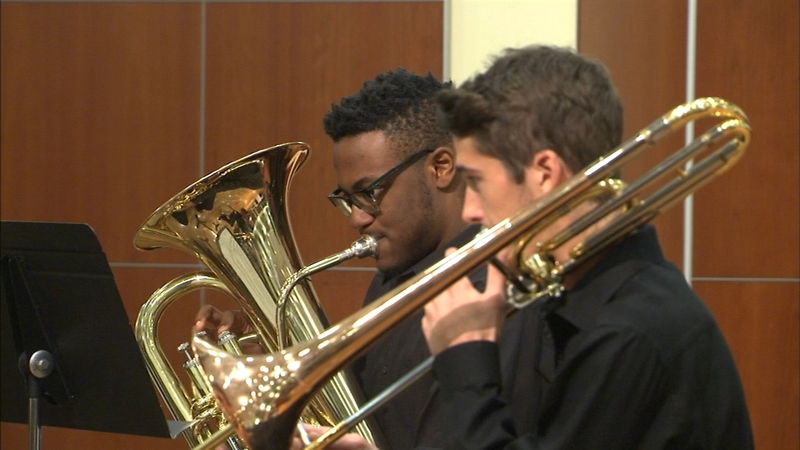 CHICAGO (WLS) -- Young musicians in Chicago are singing a happy tune because a new grant will fund the effort to find the most promising artists in the city. It's a special program for some very special students.

Daniel Darden, 17, played the tuba at a performance by students at the Merit School of Music. As a child, he was drawn to the instrument because of its size.

"It gave me a sense of hard work and motivation. It pays off. It's helped me with academics at my school," he said.

Music is Darden's passion and he wants to continue his studies in college and aspires to play tuba in an orchestra. That's his goal, despite the fact that there is only 4 percent black and Latino representation in American orchestras.

It's that absence of diversity that has inspired Chicago's classical music community to pool resources to identify and develop exceptionally promising young musicians from traditionally underrepresented communities. That effort has resulted in the Chicago Musical Pathways Initiative, established through a $3.5 million grant.

"What we are looking for are students who are dedicated to music who have that perseverance that's required to be successful," said Charles Grode, president of the Merit School of Music.

The Merit School of Music initiated the collaboration between several of Chicago's classical music organizations. One of them is the Music Institute of Chicago, which will scout talented students who will be provided with comprehensive support, including instructional, academic and financial.

Organizers say it's about empowering young people of color who might not have known a classical music career was possible.
"Letting them see people of color play at a certain level where they're on stage, they want to be like them," said Michael Manson, of the Musical Arts Institute.

Similar programs are in a couple of other big cities, and this initiative has the support of the city of Chicago. First Lady Amy Rule was at the announcement Tuesday.