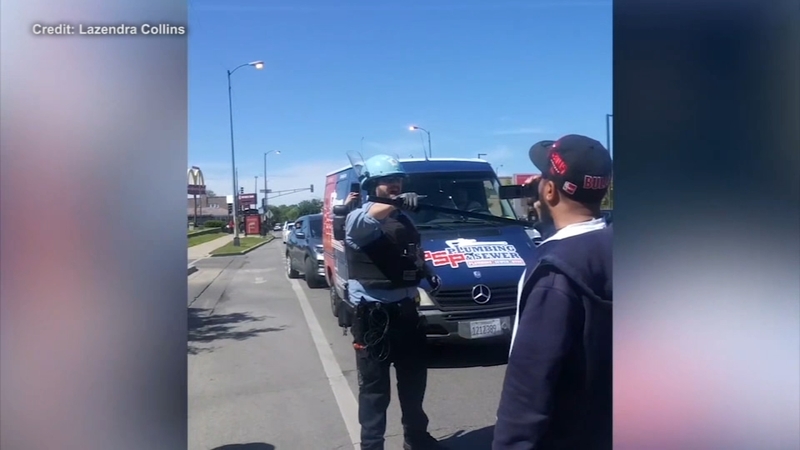 CHICAGO (WLS) -- A second allegation of police brutality has been made against Chicago police officers at Brickyard Mall, on the same day two women were seen dragged out of their vehicle in a violent arrest.

In this case, a couple claims officers attacked them and two others in their vehicle as they were trying to leave the mall, shortly after filming the May 31 incident.

"One officer hits the right side of the Jeep, the other shatters the window," said Willie Teague. "I believe this was done to provoke us to do something wrong."

"I knew to start filming just to have proof of what was going n that day," said Lazendra Collins. "They just keep hitting. Nobody did anything. We just asked for a badge number or for a sergeant. So now I'm getting hit for no reason, they're hitting me."

RELATED: Chicago police officers under investigation in Brickyard Mall incident; women describe being pulled from car and thrown to ground

A two-minute video was provided to ABC7 Eyewitness News by the attorneys representing Collins and Teague. It shows the confrontation with officers following the alleged attack on the vehicle Teague and Collins were traveling in. In the video, they can be heard asking for a police supervisor and continuing to verbally engage the officers after they walk away.

Two officers are then seen swinging their batons, but it is not clear from the video if they land any blows. That's when Collins turns to an officer who appears to be coming out of her vehicle

"Get back," the officer replies. "Get back."

"Sir. Give me my momma's keys," Collins says again.

"Get back," the officer repeats.

"That's against the law," Collins says. The officer then swings his baton, and the shot goes awry as a struggle ensues.

Collins said the officer repeatedly hit her hand with a baton. She believes he was trying to get her to drop the phone.

The Chicago Police Department released a statement Tuesday saying in part, "A Complaint of misconduct has been received regarding this incident. An investigation into this incident is underway by the Civilian Office of Police Accountability (COPA). The Chicago Police Department (CPD) strives to treat all individuals our officers encounter with respect...Any misconduct on the part of our officers will not be tolerated."