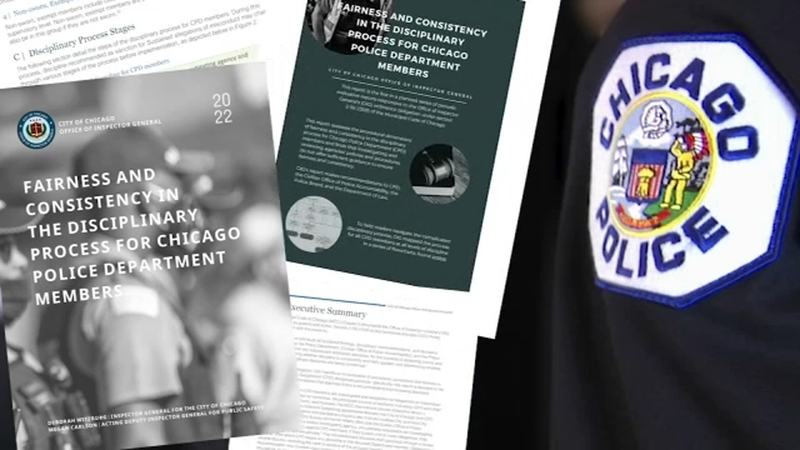 CHICAGO (WLS) -- The inspector general has concluded that when it comes to fairly policing the police, Chicago isn't doing a very good job. A new investigation finds police misconduct cases are managed inconsistently, and the procedures are sometimes unfair to officers.

She said the possible collapse of CPD's disciplinary process is a result of a system that is too complex and overly complicated.

For Chicago's 12,000 officers sworn to serve and protect, it's a disservice to them and they are left unprotected by the numerous agencies and conflicting rules of conduct, according to the OIG report.

"I think in the current system, disciplinary recommendations and the process by which they're arrived at, is sort of a black box. And that cannot be how a transparent and robust and legitimate disciplinary system works," said Witzburg. "We have heard complaints from Chicago Police Department members who feel that the penalty instituted in a specific disciplinary investigation was arbitrary, or unfair, or subject to kind of political whims."

COPA, the Civilian Office of Police Accountability, is the primary independent agency that investigates misconduct allegations, along with the police department's own bureau of internal affairs. Both are called out in the new report as inconsistent, operating on unclear policies, resulting in unfair disciplinary recommendations.

ABC7 legal analyst Gil Soffer, a former federal prosecutor, said the result of the IG's investigation may be a fairer system for police.

"If these recommendations are followed, then in the future, police officers will have a better sense of what will be the outcome, if certain factors are present," said Soffer.

"The members of the Chicago Police Department are entitled to a transparent and predictable and robust disciplinary system. And until we address some of these consistency and fairness questions, we're not giving that to them," said Witzburg.

Policing the police, including how officers are treated, is one statutory role of the inspector general, so that is why they look at these fairness issues.