3 Chicago police officers, suspect shot on NW Side during arrest; 2 other officers injured 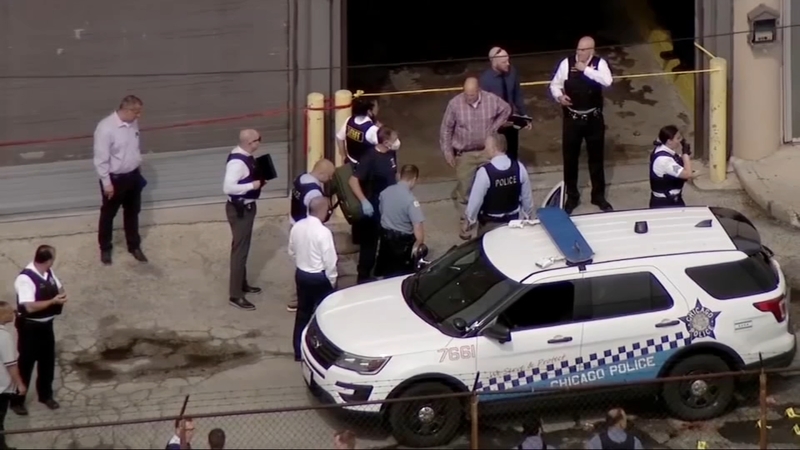 CHICAGO (WLS) -- Three Chicago police officers and a carjacking suspect were shot and two others injured while arresting the suspect in the Hanson Park neighborhood on the Northwest Side Thursday morning, police said.

Police said the officers were arresting a carjacking suspect at the 25th District station at 5555 West Grand Avenue when at about 9:40 a.m. during the arrest process, the suspect was able to fire several shots at the officers.

In addition to the three officers who were shot, two others suffered chest pains and were taken to area hospitals for treatment.

One officer was shot in the neck and transported to Illinois Masonic Hospital and is in the Intensive Care Unit.

"He sustained a gunshot wound to the left side of his neck," said Dr. Samuel Kingsley, Advocate Illinois Masonic Hospital. "It was necessary to put a breathing tube in, in order to protect his airway and allow him to breathe safely. We are working to stabilize him at this point."

Chicago police said as of 8:20 p.m. the officers taken to Loyola have been treated and released. The officer taken to Illinois Masonic is still hospitalized, and his condition has been stabilized.

The carjacking suspect was also wounded and transported to Stroger Hospital. The suspect's condition is not known.

Superintendent David Brown said the suspect was wanted in connection with a carjacking downtown on June 26.

"Officers got behind the car. Identified it as that car, from the carjacking vehicle, stopped the car, put the suspect into custody, and the rest transpired after," Brown said.

A Chicago cop was wounded in a shooting in the Hanson Park neighborhood on the Northwest Side Thursday morning.

The gun used by the carjacking suspect has been traced by ATF agents who responded to the scene, agency officials told the I-Team. The weapon will undergo a ballistics comparison to see if it has been used in a previous shooting.
Speaking outside Illinois Masonic Medical Center, Superintendent Brown asked for prayers for the officers and the whole department.

"I want to strongly emphasize the inherent danger that these and all Chicago police officers experience every day protecting the residents of Chicago," he said. "When they leave home, they leave their loved ones and put these stars on and risk everything, they risk everything protecting all of us."

Mayor Lori Lightfoot chimed in on Twitter, posting, "Today is a searing reminder of the danger our men and women of our Police Department face every day they put on their uniforms and leave their homes. This is the sacrifice they make in order to serve and protect our city and fellow residents."