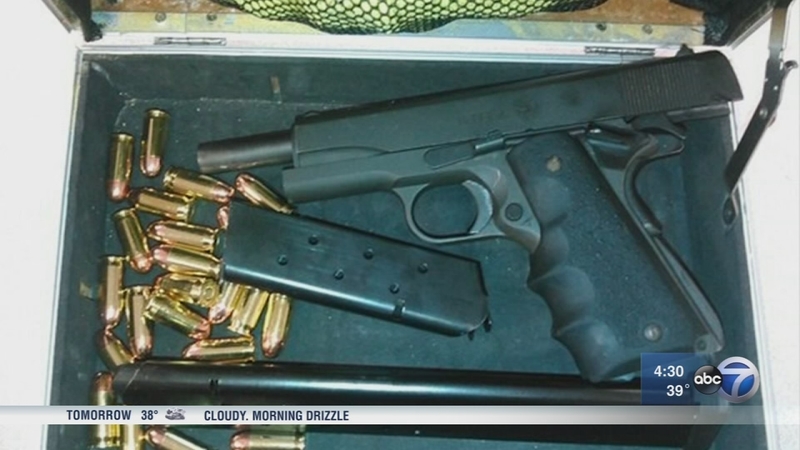 The arrests come after police said they infiltrated dozens of secret Facebook groups that require approval by a group administrator to see. Police began their investigation in February after receiving information from a confidential informant.

Daniel Caponigri, a first-year physical elementary teacher at Chicago's George Leland elementary, was arrested this week at the CPS school for selling drugs.

"Facebook has a responsibility to the people they serve to ensure these type of things don't happen, quite frankly they have not been very friendly to law enforcement to prevent these things," said Chicago Police Superintendent Eddie Johnson.

Here are additional "sale flyers" that were posted on Facebook to promote drug and gun sales pic.twitter.com/lxVwWajQJH

Superintendent Johnson said his investigators received no cooperation from Facebook during its 10 month investigation. Police said undercover officers infiltrated dozens of private invitation only secret groups on Facebook that were selling drugs and firearms.

"Many with serial numbers scratched out some with magazines capable for holding more than 30 rounds of ammo, most fully loaded ready to use at the time of purchase," said Chicago Police Organized Crime Chief Anthony Riccio.

The kind of guns, police say, that are regularly used in Chicago's shootings. Police arranged the purchase of 18 illegal firearms and $45,000 dollars' worth of drugs. Police said all kinds of illegal trafficking is done through dozens and dozens of invitation-only secret groups that are not visible on a regular Facebook page.

"The things being trafficked on the site are killing people in Chicago, I think they have an obligation to take steps to insure it doesn't happen," Riccio said.

In a written response, a Facebook spokesperson says, "We are investigating this report now as it is the first time we have been alerted to it. We do not allow the sale of guns or drugs on our platform. We routinely work with law enforcement."

Chicago police said they asked for help from Facebook, but did not get any cooperation.

Johnson said Chicago police have recovered 8,600 firearms off the streets this year and have made nearly 30 percent more gun arrests than last year.

Chicago Police Spokesman Anthony Guglielmi said that the department and Facebook would be meeting in January to better collaborate on stopping illegal activity.

Mayor Rahm Emanuel issued a statement saying, "These innovative raids are the latest example of the smart, strategic steps the men and women of the Chicago Police Department are taking to combat gun violence. Whether criminals are operating online or on the street, we will always ensure CPD has the tools, technology, training and talent to track them down. I commend the leadership and rank and file of CPD for their proactive, professional policing that has taken more than 8,600 illegal guns off our streets this year and helped drive a reduction in crime in communities throughout the city."
Report a correction or typo
Related topics:
chicagoloopfacebookdrugschicago police departmentguns
Copyright © 2021 WLS-TV. All Rights Reserved.
TOP STORIES
Jelani Day's cause of death released
Va. extreme couponers sent to prison in $31.8 million fraud scheme
Assistant director who handed Baldwin gun had been fired previously
Communities of color most impacted by Chicago area air pollution
Club owner says he called CPD twice before deadly Wicker Park drive-by
Another John Wayne Gacy victim identified
Bear cubs playfully wrestle in snow in Lake Tahoe
Show More
Chicago Weather: Sunny, drying out Tuesday
Hertz is buying 100K Teslas
Chicago FOP president leads City Hall rally to oppose vaccine mandate
After Brian Laundrie found, family says they will not hold funeral
Judge sets final ground rule for Kyle Rittenhouse trial
More TOP STORIES News