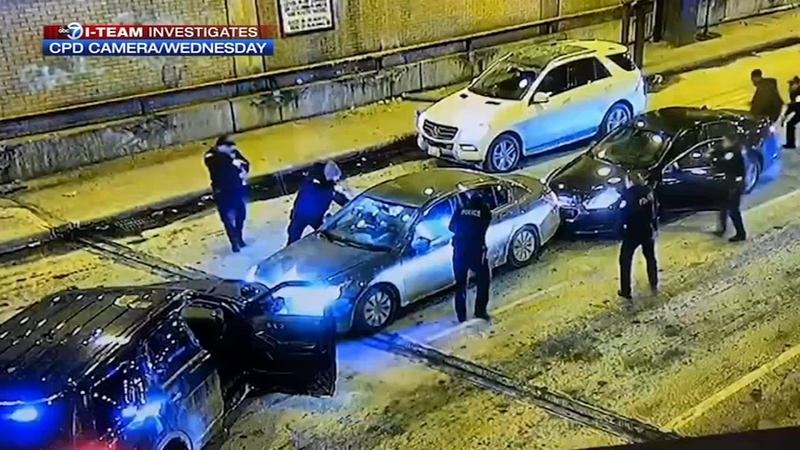 CHICAGO (WLS) -- When the ABC7 I-Team first obtained police POD video of the gunfight at Lower Wacker and Columbus Drive it was tough to tell who fired, where the shots came from and how it all played out. Now, there is much clearer video and an explanation from Chicago police and Cook County prosecutors about what happened Wednesday night.

According to court records, a license plate reader alerted police to a vehicle as stolen during a carjacking. The suspect car stopped at Lower Wacker and Columbus where officers pinned it in.

While a uniformed officer approaches the passenger side a man in the passenger seat, 24-year-old Edgardo Perez, allegedly fired the first shot at close range at the officer. Perez allegedly used a 9mm Glock with an extended clip and laser sight.

After the suspect fired, police say you can see the officer diving for cover, grabbing his shoulder that may have been hit by glass shards. Other officers arrived and fired multiple shots according to investigators and reflected on video. Perez-wounded in the gun fight-is charged with attempted murder of a police officer and unlawful use of a weapon. Prosecutors say in 2016 he received one year of court supervision for criminal damage to property.

Also facing an aggravated gun charge from the incident: 21-year-old Jesse Sanchez, who was in the back seat. Police say Sanchez admits a revolver found in the car is his. He has previously faced aggravated battery and obstructing charges.

The alleged driver, 20-year-old Noel Centeno, is charged with one count of possession of a stolen car. Police say the car they were driving was carjacked. They say Centeno claims he found it on a Skokie street with the keys in it.