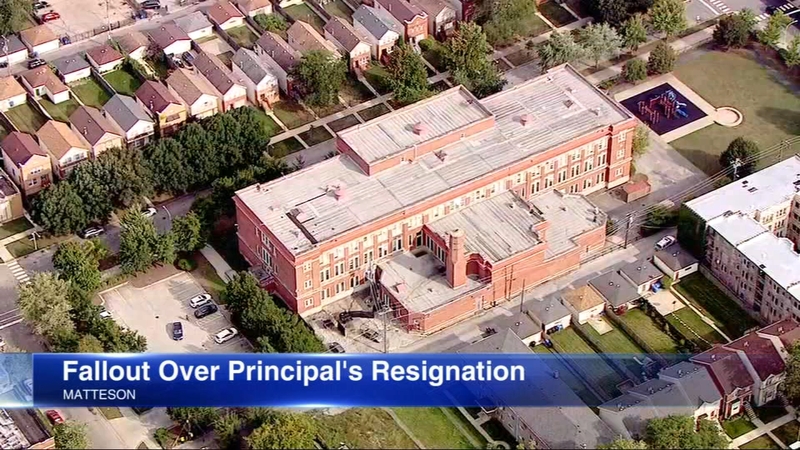 "It's very, very heartbreaking," said Jamese Valladay, the mother of a 6th-grade Powell student. "It's very frustrating to the point where you want to up and relocate to a better school district."

On Monday, Powell Principal Cedric P. Nolen resigned from his new job after allegations of sexual misconduct came to light from when he was a principal in Chicago. Nolen, a 20-year educator for Chicago Public Schools, had been the principal of Parkside Elementary Community Academy until April 2019.

On Jan. 9, the Chicago Board of Education's Inspector General received a complaint about Nolen. They conducted interviews in January, February, March and April. On April 18th, the inspector general interviewed Nolen about sexual harassment allegations.

The inspector general's 17-page report about the allegations, which was heavily redacted when released to ABC7 Chicago, concluded Nolen's actions constituted "sexual misconduct" and "sexual harassment" while working at Parkside Elementary. The report said the sexual harassment allegations were a"credible" claim, corroborated by other individuals, text messages and video calls. CPS officials also flagged Nolen's record with a "Do Not Hire" designation, which could be shared with other districts who ask for an employee's reference check.

"Nolen's conduct constituted sexual harassment because it was un-welcomed sexual conduct that had the purpose or effect of substantially interfering with (name redacted) work performance and created an intimidating, hostile or offensive work environment," the report concluded.

On April 18, the inspector general interviewed Nolen with his two attorneys present, and asked him questions about the allegations. According to the report, Nolen declined to answer questions, responding: "Under advice of counsel, I am not answering that question." The report stated it was a policy violation for Nolen not to answer questions as part of the investigation. Nolen resigned that day.

During the summer, the South Cook Oversight Committee, a group of concerned parents in Elementary School District 159, heard Nolen was going to be hired at Colin Powell Middle School in Matteson. The committee's president said he immediately sent District 159's Superintendent Mable Alfred a letter, raising specific concerns about Nolen.

"We reached out to the superintendent. We tried and tried to get a conversation with her, introduction meeting with her, to address these points," said Eleanor Byrd, secretary of the South Cook Oversight Committee. "We had absolutely no response."

Supt. Alfred did not return ABC7's calls and was not available at her office. A spokeswoman for the district said the superintendent would release a statement at the Wednesday night school board meeting.

So why did Elementary School District 159 hire Nolen?

According to CPS spokeswoman Emily Bolton, "Other school districts routinely contact CPS as part of reference checks, and we provide them information about substantiated misconduct," she wrote. "In this instance, no such request was made."

As for Nolen, his attorney said the long-time educator is devastated. In a statement, the attorney wrote: "For twenty-one years he proudly served the educational community by providing a positive, purposeful, and constructive learning environment. He remains focused on his future and is considering several options to clear his name."

Now that the principal is gone, Matteson community members want to oust the school board president and superintendent as well.