WLS
By Will Jones, Eric Horng and Rob Elgas 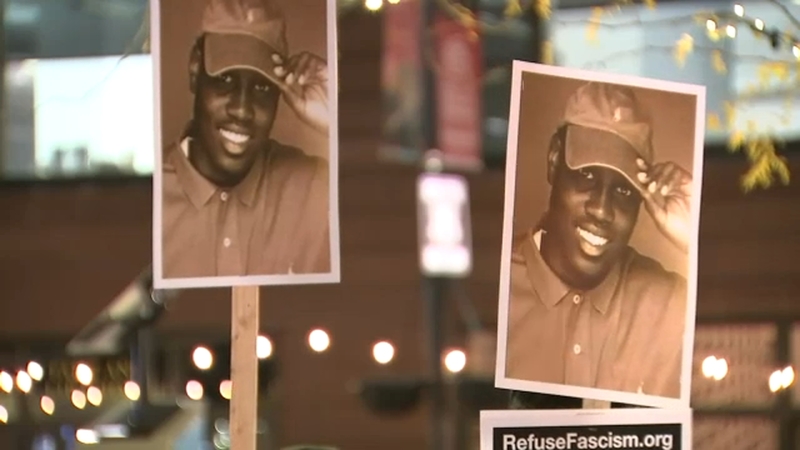 CHICAGO (WLS) -- Activists from multiple organizations gathered at Chicago's Federal Plaza Wednesday to rally the guilty verdicts in the Ahmaud Arbery trial. This comes just days after the Kyle Rittenhouse verdict, which led to demonstration over the weekend.

Travis McMichael, his father Greg McMichael and neighbor William "Roddie" Bryan were all convicted in the fatal shooting after jurors deliberated for about 10 hours. The men face minimum sentences of life in prison. It is up to the judge to decide whether that comes with or without the possibility of parole.

All three white men charged in the death of Ahmaud Arbery were convicted of murder Wednesday in the fatal shooting that became part of a larger national reckoning on racial injustice.

While those guilty verdicts were rendered a thousand miles away, but many in Chicago, many say the jury's decision hits close to home.

"Today was a small victory... But make no mistake, we have a long way to go for racial justice," said Steven Dornbusch with Chicago Alliance Against Racist and Political Repression.

A coalition of activists praising the jury's verdicts Wednesday night, while asking why it took months to bring charges against the defendants.

"There is a taste of victory here, but it would not have happened if people hadn't poured into the streets," said Dee Williams, with Revolution Club Chicago.

"[Arbery] was killed for no reason other than the color of his skin, and regardless of the accountability that his killers now face-that fact speaks volumes about how far we have yet to go," Mayor Lori Lightfoot said in a statement.

The Reverend Jesse Jackson, who attended part of the trial in Georgia, said in the end, the nearly all-White jury did not want its community to harbor killers. He added that it gives him some measure of hope that jurors came to this decision.

"I left convinced that the prosecution was arguing a substantial case, lots of documentation," he said at Rainbow Push Coalition Headquarters. "The jury, I got the impression, was going to be very fair."

All three men charged in the death of Ahmaud Arbery were convicted of murder Wednesday.

For some in the Black community, there was concern about the racial makeup of the jury and how it could impact the outcome of the trial. There was only one Black juror and the rest were white.

"I am appreciative of good people who are tired of an abusive system made the right decision," said Kim L. Dulaney, DuSable Museum Director of Education & Programs.

Amika Tendaji heads Black Lives Matter Chicago. She was one many across the country outraged by this case and believe the men targeted Arbery because of his race.

Although she is pleased with the guilty verdict, she said she's not convinced that this is a sign of change in the criminal justice system.

"History has these one-offs, where the system will sacrifice a few of its own to keep us believing that things have shifted and we're OK to keep us complacent," she said.

Travis McMichael, Greg McMichael and William Bryan, all charged in the death of Ahmaud Arbery, were convicted of murder Wednesday.

Tendaji said it's important for her organizations and others to continue fighting for change.

"I don't feel like my sons are any safer," she added.

"I think the same lesson that we took from Laquan McDonald: it does not happen without people power in the streets," said Jay Becker with RefuseFascism.org.