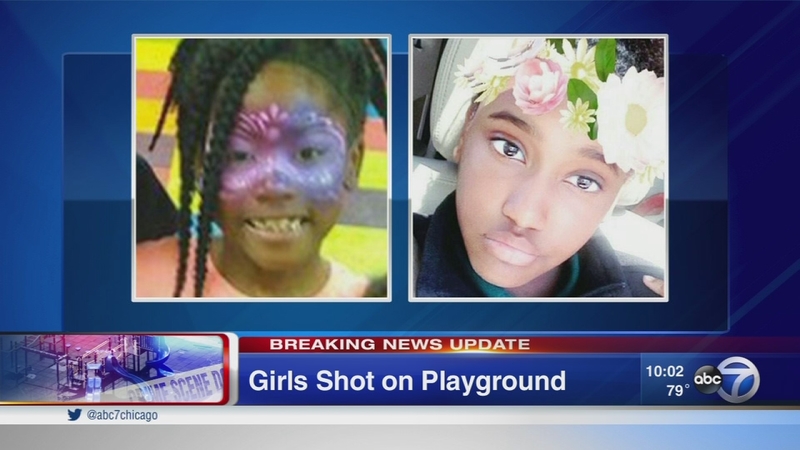 The shooting occurred at about 1:45 p.m. outside Warren Elementary School at East 92nd Street and South Jeffery Avenue, police said, while students were outside enjoying a picnic to celebrate the end of the school year.

The first victim was identified by her family as Dakayla Hart, 13, an eighth grader. Her family said she turned 13 in April.

"My little brother called me, he was just like, 'Where you at. Kayla got shot and you need to come get her,'" said Daytonna Hart, Dakayla's sister. "When he called me I was like, 'She at school. How did she get shot?' He was like, 'They shot into the school yard.'"

"I had a feeling from the time they moved here that this would happen. But why it had to be my daughter?" said her father, Emerson Hart.

"She is an honor roll student, gets straight As, plays sports, she likes going to the movies, she likes to be with her best friend," Daytonna said.

That the shooting took place at the start of Father's Day weekend was not lost on Emerson either.

"Yeah. Well, it's a terrible Father's Day weekend for me. Cuz now my child has gotta live with being shot. And she's never gonna forget," he said.

Hart's family said she will likely have to spend the night in the hospital and she will need surgery on her hand.

The second victim was identified by family as 7-year-old JayLa Wright. They said her leg was grazed by a bullet and that she is smiling and doing well.

JayLa's father got the same call Daytonna did.

While students were celebrating at the playground, gunfire tore through the jungle gym.

The school had practiced for situations like this. Teachers immediately rushed students inside as part of the school's emergency plan. They told the students to get down on the ground. In the meantime, police quickly arrived and locked down the school's campuses.

"Car came past, opened fire, got to shooting, kids scattered to both rooms and we were all taught get 'em in the classroom, turn the lights off, get 'em on the floor," said Debbie Henderson, Warren Elementary School.

Many frantic parents arrived after getting phone calls about the shooting from the school.

"My daughter just called me crying, saying they were shooting at the school and she couldn't find her brother and everybody ran, and when I got here no one knew where my child is at, no one knew where my son was at, so I had to run back and forth from building to building just to find my son," said Catherine Jones, mother.

Chicago Police Superintendent Eddie Johnson said several older students had been turned away from after school end-of-the-year events at Warren Elementary and were hanging out down the street when a vehicle approached them and a shooter or shooters opened fire on them. The older students ran back to the picnic and the gunfire followed them. Johnson said the two girls were unintended victims who were shot by that gunfire.

"I'm telling you, though, this makes me sick. These little kids out here are out here trying to have an end of the year picnic and they get shot?" Johnson said.

Johnson said police have the vehicle involved in the crime and the investigation is ongoing.

Johnson said that while this kind of violence is unusual in Pill Hill, Chicago police resources will be directed into the area for the last two days of school next week in order to reassure residents.

Both girls were transported to Comer Children's Hospital. Mayor Rahm Emanuel visited with the victims and their families shortly before 3:30 p.m. at the hospital, and was visibly upset afterward.

"Those kids were out on the playground enjoying their childhood, enjoying the closing end of a school year, having a barbecue, and these gangbangers are out shooting other gang members without any regard to the consequences. There is no person in Chicago who is not disgusted by that incident. These are our kids. That is a school. That is a playground. And that is a safe sanctuary for our children," Emanuel said. "They deserve their childhood, uninterrupted by a bunch of gangbangers who don't know the difference between a school and a sanctuary."

Police have not yet confirmed the shooters or their intended targets are known gang members. The mayor became angry when asked how the remaining students at the school are doing. Emanuel left the hospital to go to the scene of the shooting and speak to students, parents, teachers and law enforcement there.

"You can only imagine what the trauma is. I haven't been there, but you can only imagine, and I know what I saw here and thank God for the love of parents and the great medical care they have and the love of the teachers and the principal. And I would hope for once when people say enough is enough, that the rest of the criminal justice system, when they're brought there, understands what enough is enough is," he said before he left.
Report a correction or typo
Related topics:
calumet heightschicagochicago shootingeddie johnsonschoolrahm emanuelplaygroundchicago violencechild shotchicago police department
Copyright © 2021 WLS-TV. All Rights Reserved.
TOP STORIES
5 shot, 1 fatally, in Evanston
US travel restrictions take effect due to Omicron variant
Cyber Monday 2021 deals shopping guide
1 found dead, 3 hurt in Clearing house fire: CFD
26 shot, 3 fatally, in Chicago weekend violence: CPD
Jussie Smollett trial set to begin with jury selection Monday
'Dreadhead Cowboy' animal cruelty trial begins with jury selection
Show More
Family recounts moments after teen hit, killed while crossing street
Undefeated South Side youth team on quest to national title
Tributes pour in for Chicagoan, fashion design Virgil Abloh
Vaccine inequity, hesitancy made omicron more likely: Scientists
CPD seeking men wanted for kidnapping girl near West Side high school
More TOP STORIES News