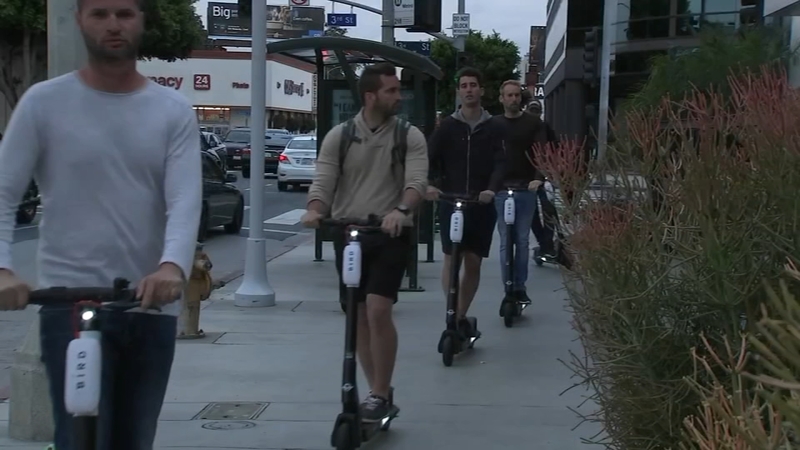 CHICAGO (WLS) -- Electric scooters will be coming back to Chicago this spring for another round of study, according to city officials.

City officials said during the initial four-month pilot program, spanning June to October 2019, Chicagoans took 821,615 e-scooter trips. Ten companies provided the scooters. The pilot area was in the West and Northwest sides of the city.

After reviewing that data, the city is recommending a second pilot.

Officials said 192 injuries were reported at Chicago hospitals. Seventy-seven percent of rides started or ended in the eastern half of the pilot area, but evidence of e-scooters connecting riders to transit, Divvy bikes, or reducing ride-hail trips was inconclusive.

"What we are seeing is scooters do replace a lot of walking trips and for individuals that may represent a time-saving or convenience," said Kate Lowe, associate professor of urban planning and policy at UIC. "I don't see that as a top transportation priority for public investment and attention."

The study found the West Loop and area along the CTA Blue Line were studded with e-scooter use but a "very low percentage of survey respondents said they rode the CTA bus or rail more often."

Lowe said a key part of the pilot was getting scooters into neighborhoods with fewer transit options. But she said the survey found that about 80 percent of uses making more than $50,000 a year. Since half of Chicago's household income is below $59,000, Lowe said that goal was likely not met.

The study found e-scooters were used most frequently during the evening rush period on weekdays and between 3 and 4 p.m. on weekends. Over the duration of the pilot, there was a significant decrease in ridership; the last week of the pilot half the volume of trips that the first week saw. In addition, many trips were short and started and ended in the same location, suggesting those rides were taken by people just going for a lap to try it out.

Of survey respondents, 59% answered that shared e-scooter companies should continue operating in Chicago. However, sentiments differed between non-riders and riders of scooters: only 21% of non-riders supported continuing the scooter program, compared to 84% of riders.

"I personally love the idea of e-scooters in other cities, but not in my city of Chicago," said Kyle Jorgenson, resident. "I think they are a great idea for cities that don't have as much congestion as Chicago."

"We learned a great deal from this pilot, including that there is significant demand for scooters as a transportation option," BACP Commissioner Rosa Escareno said. "We look forward to a second pilot in 2020 that focuses on equity, parking solutions and safety."

The ABC7 I-Team's previous investigations uncovered riders illegally zipping on sidewalks, plus litter and scooters discarded in unwelcomed and dangerous places. The I-Team also found most riders not wearing helmets, which were recommended but not mandatory. And the I-Team reported on two serious injuries as a result of scooters.

The city agreed Wednesday that the first pilot resulted in issues regarding sidewalk clutter, equity and company compliance.

The I-Team previously learned that 39 citations were written to nine of the 10 scooter companies for failing to respond to complaints within the two-hour window, failing to collect scooters at night and operating outside of the pilot zone.

Officials said the second pilot should address challenges in other community landscapes.

It's been two months since shared electric scooters hit Chicago's streets. So what's the verdict?

The full evaluation can be found at chicago.gov/scooters.

A spokesman for Lime, one of the companies included in the first pilot program, applauded the city's recommendation.

"Chicago continues to be a leader on new mobility and we applaud the Mayor for her forward thinking approach to addressing transit issues," Nico Probst said. "We look forward to continuing our conversation to bring safe, reliable and affordable transportation options to all residents and visitors."