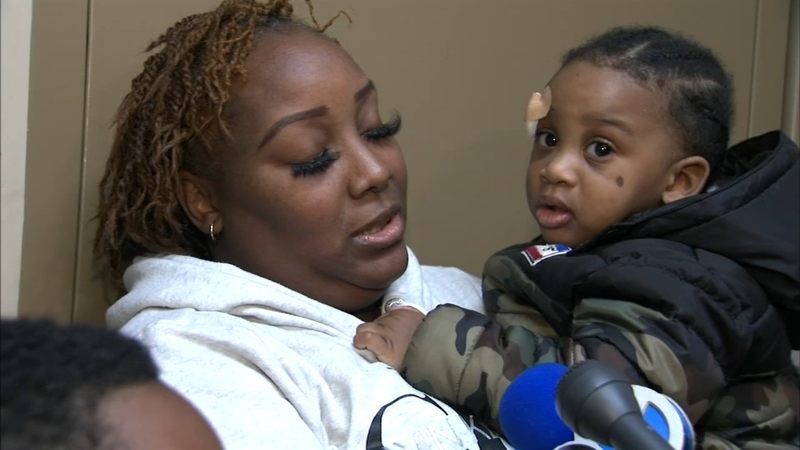 CHICAGO (WLS) -- A 19-year-old Chicago man is now charged in connection with a shooting that injured a 1-year-old boy Thursday afternoon on Chicago's South Side.

Maalik Lumpkins was arrested the same night, according to Chicago police. He's been charged with two felony counts of attempted murder.

He was identified as one of the offenders involved in the shooting, police said. Lumpkins also sustained a gunshot wound in the incident, according to police. The severity of his injuries is not known.

A bullet in the shooting grazed one-year-old Cor'Mari Allen's head while he was riding in the backseat of his family's SUV in the Chatham neighborhood.

The bullet pierced the SUV's windshield and shattered the back window. The family was headed westbound on 75th toward State Street when gunfire erupted nearby. Cor'Mari was not alone in the back seat. His older brothers, 10 and 8 years old, were right next to him.

"First I thought he got shot right here cause I just saw a whole lot of blood," said Cordaryl Allen, 10, the injured boy's brother. "There was a lot of blood."

Cor'Mari's mother said she was so distraught, she jumped out of her vehicle to help her child, but never put the SUV in park. It continued to roll until she stopped the vehicle. At that point, she said she was afraid to touch her injured child and screamed for help.

"These are innocent children, and they deserve a chance," Ashford said. "This is a one-year-old. He don't know anything."
Surveillance video at the gas station, which is located 75th and State Street, shows four men jumping out of their vehicle, and then targeting a man walking out of the building. They shoot him, but he manages to pull out a gun and fire back, shooting one of the four men. In all, two men were shot and injured. Their conditions were not available Friday afternoon.

The Dolton family had just left their grandma's home in Chicago and was headed to their great-grandmother's house in the suburbs when they were got in the crossfire. "It's so unfortunate, just driving minding my own business," Ashford said.

Bullets also shattered a window in a black Ford Escape. The owner, also innocent, told Eyewitness News he narrowly escaped because he was inside looking for a soda when the shooting happened.