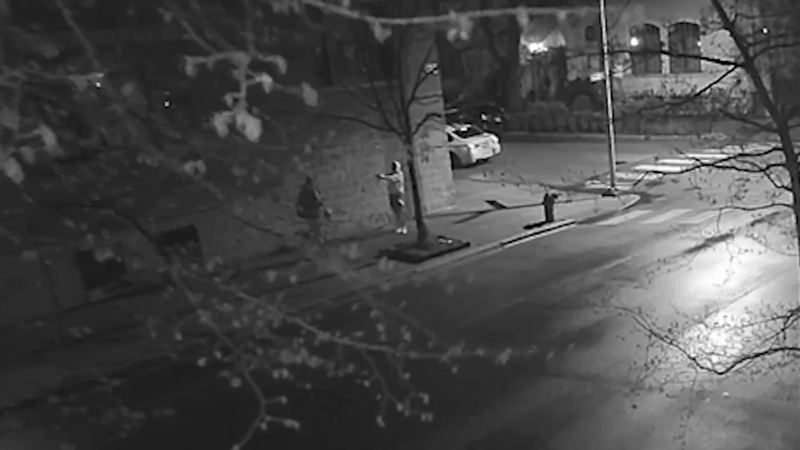 CHICAGO (WLS) -- Residents in Chicago's Lincoln Park neighborhood are on high alert Friday after two violent crimes took place overnight - and police now believe they may be related to six others in the last three days.

The first was an armed robbery at Fullerton and Clifton on DePaul's campus. The second took place near campus at Wayne and Webster. In that one, a man was shot three times after giving up his cell phone.

Chilling surveillance video shows a white sedan pulling over, then the robber gets out and hides around the corner, waiting for the victim as he walked down the sidewalk.

Video shows the suspect step out and point a gun at the man, demanding his belongings, phone and passcode. There is then a struggle before the victim is shot multiple times, twice in the back and once in the head. We stopped the video before the first shot is fired.

The victim is believed to be in his 20s, possibly older, but because the thief made off with his ID, he has not yet been identified. He underwent two surgeries Friday and is reportedly fighting for his life.

"The first perpetrator was demanding the cellphone passcode from the guy laying on the ground in pain," said a neighbor named "Dave." "And as soon as he got the code, he shot him again, a third time, and they drove off."

"Dave" ran out to help, and so did the husband of a woman who is too terrified to be identified.

"The man was laying on his side, unresponsive, trying to breathe," she said. "My husband and the man were telling him just, 'please stay with us.'"

"There was no sense of urgency to leave," "Dave" said. "After the first two shots loud, the whole neighborhood heard. He wasn't running away, he didn't worry, he had no fear of getting caught."

The victim was shot twice in the back and once in the head as the sound of gunfire woke up several neighbors.

"Our dog woke us up and about five minutes after that, three loud bangs in succession," neighbor Peter Durbin said.

"Exactly at 3:05 a.m., three shots, bang, bang, bang," neighbor Redd Fellars said. "I knew they were gun shots. It couldn't be anything else."

Just minutes before the shooting, a DePaul University student was robbed, but not hurt, just a few blocks away at Fullerton and Clifton. 2nd Ward Alderman Brian Hopkins said it appears the two incidents are related. A white sedan was used in both crimes.

"It appears they were driving around the neighborhood at 3 in the morning looking for victims walking alone to rob them," Hopkins said. "This is a predatory act. We are happy detectives have good leads because these offenders need to be brought to justice."

The leads are from several surveillance cameras in the area, but neighbors say more is needed.

"I really believe there needs to be more police," neighbor James Canar said. "100% that's what needs to happen."

"We're watching our city decline into criminal lawlessness," Hopkins said. "You know there literally is not a neighborhood in Chicago that is immune from this now. It happens everywhere. It can happen at any time and it's just terrifying to people. This has to stop."

The white sedan used in both incidents was recovered Friday on Chicago's West Side, and police believe it was stolen.