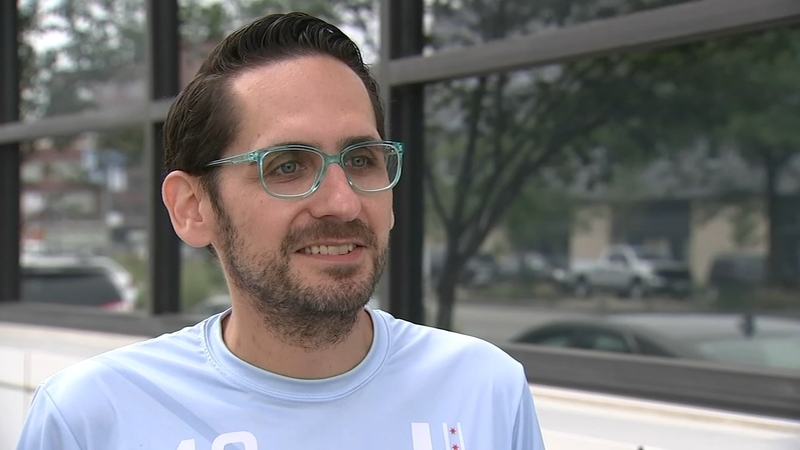 CHICAGO (WLS) -- Scott Morrow knows he is lucky to be alive after a stray bullet nearly struck his spine, almost killing him.

"Lost a spleen, a kidney, part of my pancreas, and they repaired my stomach and my diaphragm, so it was a lot," he said.

The 41-year-old proofreader and aspiring musician survived the ordeal, which happened around 1 a.m. on June 20, during Puerto Rican Parade festivities. Morrow, a Logan Square resident, was walking to a friend's Humboldt Park home.

"I felt a really sharp pain in my back, I crumpled to the ground, passed out for a minute," Morrow recalled.

Police found Morrow laying on the sidewalk near Division and Kedzie with a gunshot wound in his back that may have come from gunfire after someone started shooting following an unrelated traffic accident nearby.

His parents were in Michigan visiting with friends when they found out.

As Morrow was rushed to Mt. Sinai Hospital, he said he fought for his life by thinking about the family he didn't want to leave behind, the album he so desperately wanted to finish, and his beloved Chicago Bears. He got a visit from their rookie quarterback and plenty of well-wishes.

"I was just thinking about all the things I want to see and experience in this life," he said.

Scott continues to recover at his parents' west suburban home, but he spent nearly a week in the hospital and has gone back twice due to complications. He suffers from survivor's guilt as he worries about mounting medical bills.

A GoFundMe page for the family has already raised more than $30,000. Morrow still has a long recovery ahead of him, but he should be able to live a fairly normal life in the city he loves.