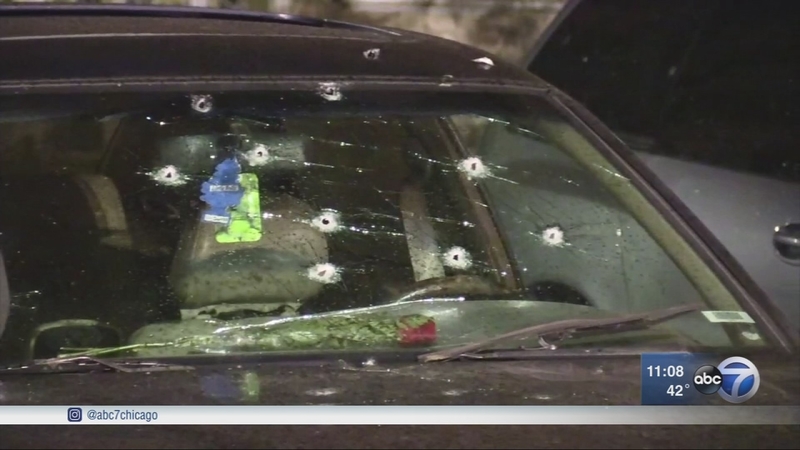 CHICAGO (WLS) -- Two small children were hurt in a shooting Tuesday night at a gas station on Chicago's Southwest Side.

A 4-year-old boy suffered a graze wound to his arm and a 3-year-old girl suffered cuts to her face from flying glass, police said. They were transported to Stroger Hospital and are expected to be OK.

They were found in a car near West 38th Street and South Francisco Avenue in Chicago's Brighton Park neighborhood. The vehicle had been riddled by at least a dozen bullets.

The children were sitting inside the car at the GoLo gas station in the 3500-block of South California Avenue around 10:45 p.m., while two teens pumped gas. Police said that's when someone in a dark-colored SUV fired shots in their direction.

"He drove away and somebody stopped in front of his car and they started shooting," said the gas station clerk, who was afraid to show his face. "I was serving my customers and I heard some noise. I thought it was firecracker, because I work inside."

Police said after the shooting, the group drove from the gas station to the corner of 38th and Francisco.

A 17-year-old boy was shot in the back. He was rushed to Mount Sinai Hospital, where he is listed in critical condition. An 18-year-old man was shot in his right hand. He was also taken to Sinai, where his condition stabilized.

The clerk said he is used to the gunfire and gangs in the neighborhood.

"It's uh, you know. We get habituated to it. It's normal in this area," he said.

"As you look at this vehicle and see over 12 holes inside this car, give us a call, the Chicago Police Department a call. Let's put these perpetrators where they belong and get them off the street. This is no way coming up to Thanksgiving. If you look at this car they're very lucky to be alive," Holmes said.

A source told ABC7 Eyewitness News the two teenagers who were shot are documented gang members.