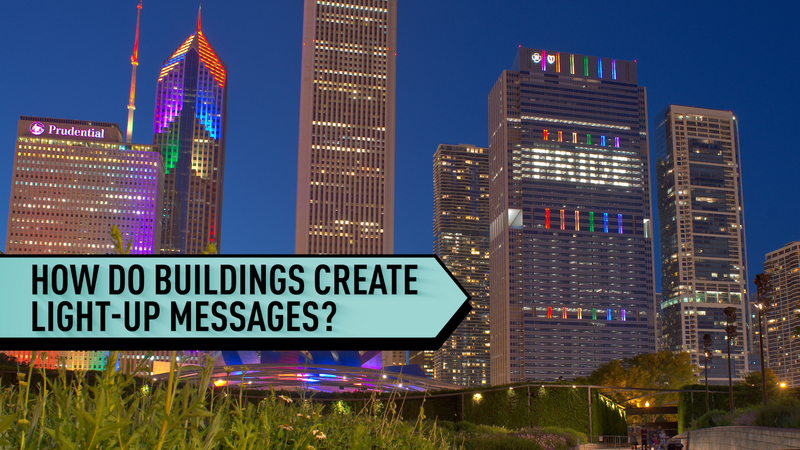 Take a behind-the-scenes look at these iconic skyline messages

CHICAGO -- It's no secret Chicago has one of the best skylines in the world! But the Blue Cross & Blue Shield building on E. Randolph street grabs the attention of millions with their positive messages.

Did you ever wonder how a building creates illuminated billboards? Here's a behind-the-scenes look at how electricians manually create these messages!

"Usually around 5 o'clock, the day a message has to go up, we begin pulling shades," says head electrician Roy Swanson.

The messages displayed include everything from health and wellness to Chicago sports teams.

Vice President of Government and Community Relations, Harmony Harrington, describes the messages: "Some memorable lightings have been 'Live the Dream' in commemorance of Martin Luther King Day, messages to support our front line workers, rainbow colors and the word 'Pride." We lit our building in support of Chicago sports teams like the White Sox, the Cubs, the Bulls... we've even lit it with the Stanley Cup for the Chicago Blackhawks."

Swanson explains the typical length of a word is 6 windows wide. Each letter is 5 stories high. After he creates the message on his computer, he then has to build it backwards!

The electricians that closed the blinds are looking at the windows from the inside out, so Swanson taught himself out to write backwards!

Swanson says, "You don't want to spell anything wrong!"

But not every message makes it onto the building.

"We don't put everything up on the building front. We don't do proposals or wedding announcements. But we do try and partner with local organizations to bring awareness to key health issues," Harrington said.

Even though the messages are always white, Swanson explains there are colors that illuminate the building.

Everyone from the building managers to the electricians to the Chicagoans who live in the city take pride in the building messages.

"It's cool to know that you're the one that was part of that message going up. And it's usually because something good has happened," Swanson said.
Report a correction or typo
Related topics:
chicagolooplocalish show (lsh)localishwlsbe localish chicago
LOCALISH
Kids are the stars of the show at this student-run circus
Enjoy a rockin' good breakfast at this California restaurant
Goal! Hometown youth soccer players head to international tournament
Coffee shop's inspiring founder brews 'daily cup of believe'
TOP STORIES
Death toll rises to 21, mostly children, in TX school shooting
Uvalde school shooting: What we know about 19 kids, teacher killed
Republican candidates for Illinois governor face off in 2 forums
Father of Texas yoga instructor accused in cyclist's murder speaks out
Chicago expected to move to 'high' COVID level by Friday, Arwady says
Gary teen killed in shooting identified by family
Woman shot near CTA Red Line stop on South Side
Show More
Biden says 'we have to act' after Texas school shooting
1 killed in 10-vehicle crash on I-294 in Glenview
Long COVID symptoms mainly affect women in their 40s, study finds
Watch Steve Kerr's raw, emotional plea after Texas shooting
How to talk to kids about Texas school shooting
More TOP STORIES News