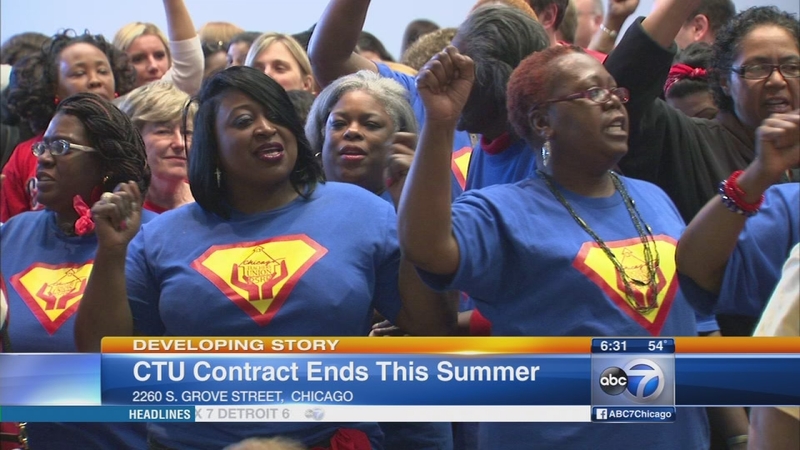 CHICAGO (WLS) -- A bitter contract fight could be brewing between the Chicago Teachers Union and Chicago Public Schools.

The union said the school board wants teachers, social workers and other union members to take a 7 percent pay cut by paying their own pension contributions. CTU President Karen Lewis said union members are insulted by the demand.

Union leaders announced at a meeting Wednesday night they are revving up for a battle with the board.

"We're telling our rank and file to be ready for a fight. That we're going to fight for justice in schools. Come what may, we're not scared of a fight. We'll be ready for one," said Jesse Sharkey, CTU Vice President.

After six months of negotiations, the CTU filed an unfair labor practice complaint with the Illinois Educational Labor Relations Board on Wednesday.

The union said it has asked for a mediator three times, but the school board refuses.

CPS said it has not yet reviewed the union's complaint. But they are looking forward to conversations about the next contract. The current contract expires June 30.

"Our responsibility is to work together to make sure there is a pension - and do it in a way that doesn't undermine what we're doing in the classroom or in education as a whole," Mayor Rahm Emanuel said.

In September 2012, teachers went on strike for the first time since 1987. So far, there has been no talk of a repeat.

Both sides are scheduled to meet next Thursday.