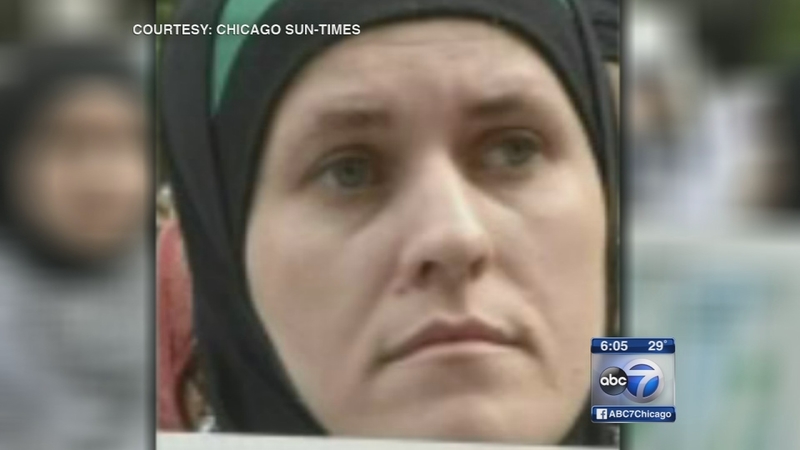 CHICAGO (WLS) -- There were unusual words of sympathy from a federal judge in Chicago, who apologized to the relatives of an accused terrorist collaborator because he had to keep her locked up.

It's not often that you hear a judge say he'd like to see an accused terrorist let out, but that is what Mediha Medy Salkicevicheard on Tuesday. She is the 33-year-old mother of four children from Schiller Park, arrested last Friday and now facing federal charges that she funnelled combat resources to ISIS. On Tuesday, U.S. District Judge Jeffrey Cole said he would be "thrilled" if she was eventually set free on bond.

Salkicevic's supporters left the federal building appearing devastated by what had just happened in court. The Schiller Park wife and mother will be staying in custody until federal marshals can transport her to St. Louis, where she is under indictment with five other Bosnian nationals. All are accused of funding or supplying military gear to ISIS and al-Qaeda fighters in Syria and Iraq.

"Of course were disappointed in the judge's decision. We respectfully disagree with him. We'll be taking it to St. Louis and we'll take it further if we need to," said Andrea Gambino, attorney for terror suspect.

In court, Judge Jeffrey Cole ordered her held, seemingly against his own better judgement. Judge Cole told her family: "I am sorry for this."

The judge said, "If some judge down (in St. Louis) wants to (release you), I would be thrilled." Then he said, "I hope they let her out. I just don't feel I have the legal right to let her out."

Salkicevic has no criminal history and her Facebook page contains little to allude to the illegal fundraising she's accused of, suggesting only a devoted Muslim. Her profile picture is of a Muslim woman and the words: "hijab is my personality."

Although she lives in a Schiller Park apartment house and works nearby as an air freight supervisor at O'Hare, prosecutors pointed out that Salkicevic is building a house in Bosnia - where her parents still live - suggesting she might be tempted to flee what could spell a 30-year prison sentence.

"She's an American citizen, she has four children here she's built a life here she's chose to be here, so I don't think that that means she's a flight risk," Gambino said.

When Salkicevic was arrested Friday she was driving to a passport office - something the judge mentioned during Tuesday's court hearing. And a little while ago, in the official written order denying her bond, Judge Cole commented on one element of the indictment, in which Salkicevic allegedly told a co-conspirator that she hoped rifle scopes sent to foreign fighters would be put to good use.