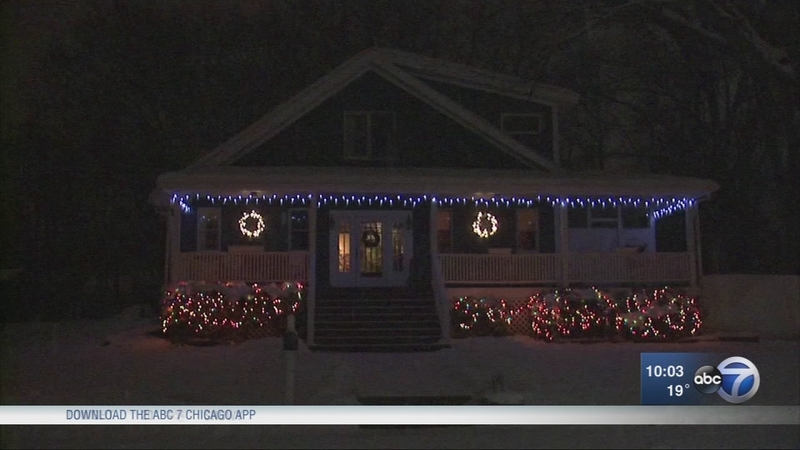 Snow, ice and bitter cold arrive for the weekend

Snow began falling in the city shortly before 4 p.m. and while the snow is light, it is so cold that even light snow will stick.

A Winter Weather Advisory is in effect from noon Friday to 6 a.m. Sunday for the Chicago area. Travel conditions will deteriorate.

It will not be a consistent snow storm, said ABC 7 meteorologist Cheryl Scott. Friday night's snow will taper off in the early morning hours, and some areas could see some freezing drizzle during that break. Then another round of snow will begin Saturday night and into Sunday morning.

Lake and McHenry counties are bearing the brunt of the storm. Northwest suburban Fox River Grove was drenched in a picturesque white.

"Refreshing and fun. Don't stay home. It's Christmas. Get out into the festive season," said Mark Cope, who was out enjoying the snow.

Salt trucks rolled out around 5:30 p.m. to clear the hilly and winding roads.

"Right now we're using regular road salt. If the temperatures drop, we'll be using our beet juice along with the salt to help have the salt work a little faster," said John Reese, Operations Manager for the Village of Fox River Grove.

Travelers should check with their airlines to see the status of their flights. Several airlines were allowing passengers to rebook flights without change fees, including Southwest, United Airlines and American Airlines.

"We've been lucky. We've had two snow storms over the weekend, but this is going to be right in the middle of rush hour," said Randall S. Blankenhorn, IDOT secretary.
Emergency officials are warning drivers to take extra precautions.

"If you have to go out, take plenty of time to get where you're going. Don't be in a hurry," said Alicia Tate-Nadeau, OEMC.

"You just got to be safe out there because everyone just forgets how to drive all of a sudden," said Scottie Prado, driver.

The Chicago Department of Transportation had 280 salt trucks on the road during rush hour. CDOT said trucks will focus on arterial roads first in order to make sure emergency vehicles have easy road access.

"Ensuring that the main streets are safe and passable is essential. That's why we began plowing Lake Shore Drive and all the main arterial streets. It's important for us to keep those streets open for emergency vehicles as well as motorists," said Charles Williams, Department of Streets and Sanitation Commissioner.

Illinois State Police said there have been some crashes and spinouts on the expressways, but fortunately no reports of serious injuries.

Temperatures will plummet Saturday night into Sunday morning, which puts the area at risk for black ice and flash freezing.

Chilling temperatures will follow the snow. When temperatures drop quickly while there is also moisture on the roads from snow or melted snow, that moisture freezes very fast, explained ABC7 meteorologist Larry Mowry.

This flash freezing is of particular concern Saturday night into Sunday morning, when temps could drop 20 degrees in mere hours. At bedtime Saturday night, temperatures in the city are forecasted to hover around 21 degrees. By the time you wake up Sunday morning, temperatures in the city are forecast to be about 0. That quick of a drop plus snow and moisture could lead to black ice and flash freezing.

BEARS' SUNDAY GAME COULD FEATURE RECORD COLD
If you're headed to the Bears game at Solider Field Sunday, expect the temperature at kickoff to be 1, with a wind chill of -15 - -25. Sunday's game could be one of the coldest on record. On Friday, StubHub said seats are going for less than $40.

The Bears spent 75 minutes outdoors Thursday in single-digit temperatures trying to prepare. There's a bit of a debate over who's going to wear sleeves.

Head coach John Fox said "As long as they perform well, I don't care what they wear."

Two people were rescued from the freezing waters of Crystal Lake Friday after their ice boat fell through thin ice, officials said.

Fire officials said the boat fell into the water and overturned. Rescuers used ice suits to get them out. Both victims were evaluated at the scene and refused transport to the hospital. One rescuer was treated and released after being exposed to the cold water.