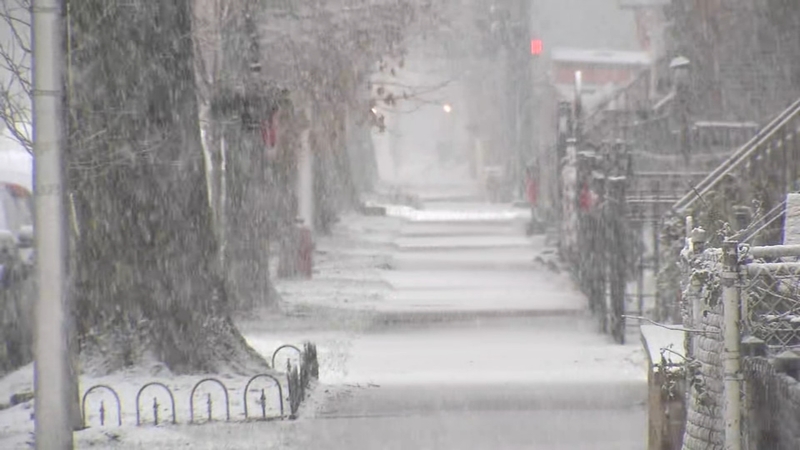 CHICAGO (WLS) -- The Chicago area saw its first measurable snow of the season Tuesday after one of the longest snowless droughts in the city's history.

The snow began moving through the western suburbs and the city Tuesday morning after the commute and continued to get heavier until mid- to late-afternoon, when it started tapering off into rain and then into clearer skies.

While it mostly didn't stick around, Chicago saw its first measurable snowfall Tuesday since March.

"I'm a little afraid to drive in the snow," said Chavon Simmons, Chicago driver. "You know how it is on the first snow."

The temperature dropped and fresh snow laid a slick foundation on road surfaces. One car in Lake County slid off the road and into a light pole.

Around one to four inches of snow fell depending on where in the area you were, though much was expected to melt as temperatures warmed.

"I mean, I'm used to it, man," said Robert McMiller, Chicago driver. "We've been doing this in Chicago for a long time. This ain't nothing new."

While the snow is late, the rules of the road to maneuver through it are the same for many. Unless, of course, you're Texas native Greg Garcia, who was forced to pull over to fix his broken window.

"It's my first winter in Chicago," he said. "People are looking at me like I'm wild because I'm driving around with my window down."

More than 200 plow trucks were deployed onto Chicago streets to treat the roads with 400,000 tons of salt.

Plows hit the road and shovels hit the sidewalk as several inches of snow finally fell in Chicago's suburbs.

In Algonquin, a fleet of 12 trucks was sent to salt 150 miles of surface roads in town and then, depending on accumulation, plow the streets.

In Schaumburg they have nearly double the road miles and nearly twice as many trucks to get it done.

The late season arrival of the first snow has a number of benefits for municipalities. They have not only saved on the overtime budget for drivers, but they also have had no need for salt so plenty is stockpiled. In Schaumburg they still have their full allotment of 6,500 tons.

Many municipalities mix their road salt with calcium chloride or beet juice to help make it more effective.

By mid-afternoon the pretty part had already passed.

"I thought it was still snow when we first walked out here, but realized it was all rain," said Matt Keley, Wicker Park resident.

"I really enjoyed the snow," said Don Johnston, who was visiting the city. "The rain, not so much."

The record snowless stretch for Chicago occurred in 2012, when the city went 290 days without measurable snow. Chicago would need to make it until Friday to break that record, according to the National Weather Service.

Measurable snow is defined by at least a tenth of an inch on the ground.

While this was the area's first snowfall of the season, more snow appears to be on its heels. Light snow of up to an inch is expected to fall Wednesday night, with more wintry weather in store for New Year's Day. Accumulating snow is possible, and temperatures turn colder this weekend.