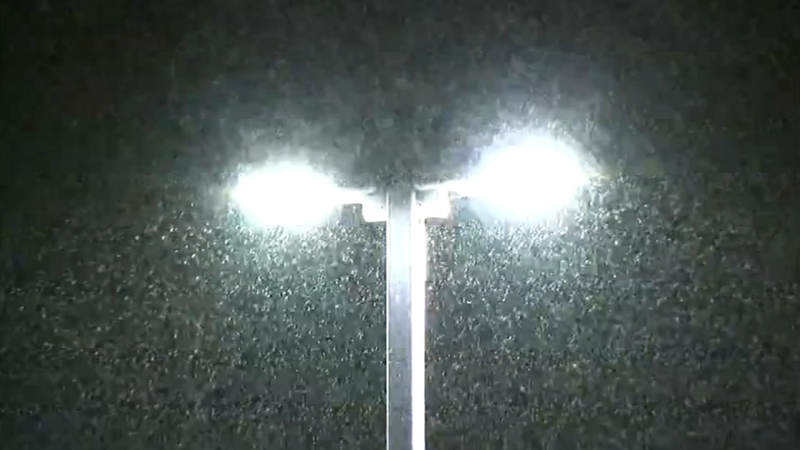 CHICAGO (WLS) -- Snow moved into the Chicago area on the heels of historic cold.

A thin layer of snow turned already-frozen pavement into a slippery, dangerous mess. On and off ramps were especially treacherous, some more like ice rinks than asphalt.

Snow moved into the Chicago area on the heels of historic cold.

Anywhere from a dusting to three inches fell Thursday evening, depending on where you are, but it didn't take much to create dangerous situations.

Melissa Heine totaled her car while exiting I-294.

"I spun out a couple of times and hit the lamp post near Cicero," she said, grateful to be uninjured in the wreck.

The sun rose over a steamy Lake Michigan Thursday morning as Chicago saw a second day of below-zero temperatures.

Winds were not as strong as on Wednesday, but a Wind Chill Warning was in effect until noon Thursday with wind chills as low as -50. Temperatures in the suburbs got to as low as -32 in Sugar Grove, -28 in Barrington and -26 in Ottawa.

Don't try this in the dangerous cold! A nearly naked man was spotted by a photographer rollerblading along Chicago's lakefront Wednesday night in -18 degree weather.

The lowest temp recorded Wednesday was -23 (and -49 wind chills) at O'Hare International Airport, breaking the record for Jan. 30. Wednesday's high of -10, which was recorded at midnight, is one degree shy of the all-time coldest high for the city.

Here's something you don't see very often: an ice-breaking boat pushing its way up the frozen Chicago River.

A Winter Weather Advisory is in effect for Kane, Will, DeKalb, Grundy, Kankakee, Kendall and Livingston counties in Illinois and Jasper and Newton counties in northwest Indiana until 3 a.m. Friday.

Even before the first flakes hit the ground drivers it as a rough ride for drivers. The Illinois Department of Transportation said it helped more than 300 stranded motorists since Tuesday, and the Illinois Tollway's Zero Patrol assisted more than 500.

AAA said it received more than quadruple the usual number of calls for help.

"Right now we are responding only to emergency calls. That will probably be lifted tomorrow, but we really want to get to those first who are stuck in the elements," said Beth Mosher, AAA Chicago spokesperson.

Truck drivers got hit with a brutal one-two punch, as the cold crippled their diesel engines and the snow made roads too treacherous.

"If you are driving out there, do not be in a hurry. Your life is more important than that," Heine said.

ABC7's John Garcia has the latest on transit service as Chicago thaws out of its deep freeze.

The extreme cold had a major impact on public transit Wednesday and Thursday and despite officials hopes and best efforts, some services will not be fully back to normal for Friday's commute.

Ten Metra lines - all those except for the Metra Electric Line and the South Shore Line - are expected to resume normal service Friday, Metra confirmed Thursday afternoon.

The Metra Electric Line and the South Shore Line were both suspended Wednesday. Both lines will remain suspended Friday due to damage to the overhead power system caused by a freight train derailment Wednesday night, officials said.

Amtrak resumed some long-distance train service to and from Chicago Thursday, but short-distance service remained suspended.

The CTA was under an Extreme Cold Weather Advisory on Thursday, which means riders should expect delays on rapid transit from mechanical problems on equipment and weather-related signal and switching issues.

Pace, which provides bus service to people with disabilities, canceled their subscription rides -- regularly scheduled pickups and drop offs for appointments. Riders who must travel should call Pace to reschedule their appointments for Wednesday and Thursday. Riders should also double check that their destinations are open in the extreme weather.

In Chicago, Lyft is offering free rides to warming centers using the code CHIJAYDEN19, up to $25 per ride, through Friday.

Air travel was also impacted by the extreme cold.

American Airlines said they are experiencing some refueling issues and other airlines may be reporting issues as well.

"It's going to be a challenging day at ORD today with the extreme temperatures," a spokesperson for American Airlines said. "Our teams are doing the best they can to get our customers accommodated as safely and quickly as possible."

With wind chills reaching -50 degrees, KCRG reports that authorities believe the death of an 18-year-old college student was weather-related.

Thousands were without power on Wednesday. ComEd said power had been restored to approximately 60,000 customers Wednesday.

Chicago will offer five warming buses to offer people cover from the weather. Outreach workers were working around the clock to connect homeless residents with shelter.

More than 270 warming centers are available throughout the city in every neighborhood. You can find them at libraries, park houses, community centers, police stations and churches.

Contact 311 for immediate assistance. The city says no one in need of shelter or help will be turned away.

The dangerous deep freeze can also make it difficult to keep your home warm. To avoid a loss in heat experts recommend replacing your furnace filter and keeping vents clear. Also lower blinds and close drapes.

Veterinary physician Tony Kremer joined ABC7 with his dog Ania with tips to keep pets safe in the cold.

Before going to bed, raise your thermostat a few degrees to help offset the inevitable loss of heat. If you have a high-efficiency furnace, clear the intake and exhaust of snow and ice, which could pose a carbon monoxide danger.

When the temperature begins to drop, follow these tips from AccuWeather to keep your pipes from freezing.

To keep your pipes from freezing, experts say to trickle your faucets. If they still freeze, never thaw pipes with an open flame. Use a hairdryer instead.