GARY, Ind. (WLS) -- The Gary Fire Department said Monday it was investigating a fire that killed three children, ages 2, 4 and 5, as arson.

Siblings Jayden Mitchell, 5, and Alaya Pickens, 4, along with their 2-year-old cousin Yaleah Cohen, died in a blaze that started around 11:30 p.m. Friday at an apartment complex in the 4200-block of West 23rd Court.

"I'm hurting real bad because everybody who knows me knows I loved my grandkids," said Yolanda Mitchell, the victims' grandmother. "I'm so glad I hugged and kissed them, not knowing it was the last time."

Jayden and Alaya's mother, who declined to be identified, spoke to ABC7 and said she was devastated. She was hospitalized at Methodist Hospital Northlake Campus.

"I feel so horrible because I know my baby was calling out to me, wondering where I was, when I was just right there beside him and we got separated," she said. "He couldn't find me and I couldn't see him through all the black smoke and stuff." 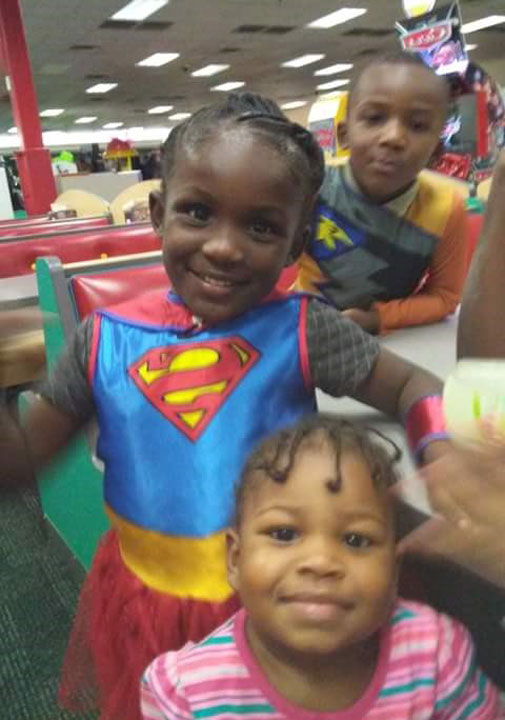 Three children were killed in a Gary apartment fire on Christmas Eve.

Her husband, who sustained serious injuries and remained hospitalized Saturday night, told her to escape through the second-floor window. After she jumped, she said she saw her youngest child on the first-floor.

"My youngest baby came walking toward the front door. She is one-year-old, so I ran and grabbed her and pulled out the fire," the mother said.

But her husband could not rescue the other children.

The fire started in the first-floor living room and spread throughout the unit. The children were found upstairs. Two were in a bedroom and the other was near the stairs.

Mitchell, the children's grandmother, said she had been at the house Friday night, playing with the kids. She recalled how the children begged her to let them open one Christmas gift early. She left around 10 p.m. Shortly after, there were calls for help after neighbors reported the fire at the Oak Knoll Renaissance Apartments.

Neighbors described hearing the kids screaming and not knowing what was happening.

"All you could hear was the kids screaming," said Diamond Childress, a neighbor. "I can't even sleep because I keep replaying the screams in my head over and over again."

"All I saw was the flames. There really wasn't anything anyone could do," said Keisha Stokes, who lives nearby.

The family believes they were targeted by someone who threw a Molotov cocktail through the window.

Near the scene, a memorial of stuffed animals had been set up for the young victims and continues to grow, as family and the community struggle to cope.