Coach at Nebraska school rushes to save student choking on cheeseburger: VIDEO 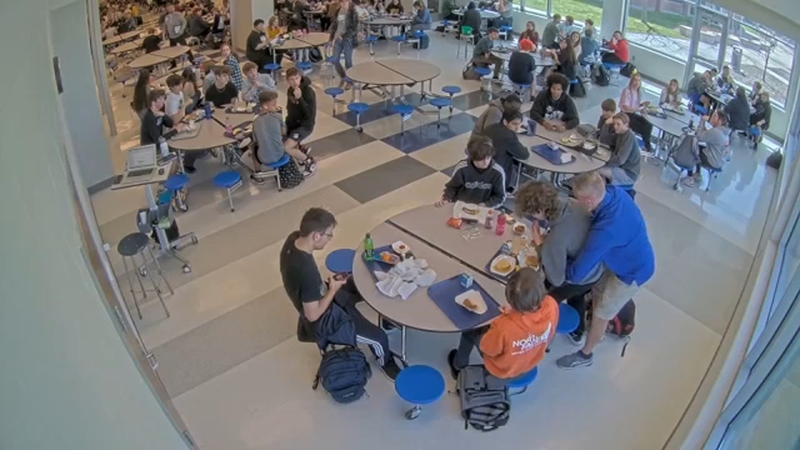 Teacher rushes to save student choking on cheeseburger

"Yeah, that's the point where I start to realize like, something's not right," said Riley Kelly.

The freshman had just taken a bite of a cheeseburger and it got stuck in his throat.

"I just didn't chew it all the way," Kelly said.

In a video, released by the school, you can see as he reaches for his milk.

"I had a little bit of trouble opening my milk because the panic was building up," Kelly said.

As this was happening, Coach Hueser, who is seen under the clock, continues to work on his laptop.

"I was like drinking the milk and I didn't feel any milk. I just felt the milk being held there in my throat and I couldn't breathe," Kelly recalled.

Kelly's tablemates don't yet notice either.

"It was all so sudden. It was like a flash of lightning in my head but at the same time super slow," Kelly said.

Kelly grabs his throat and students yell for help.

"Just that universal sign that he was choking and sure enough," Hueser said.

"All I remember is just like the fear... next thing you know, I was being saved," Kelly recalled.

You can see as Hueser leaps up and immediately performs the Heimlich maneuver on Kelly. After a few good thrusts, the chunk of cheeseburger is out.

"Every two years, when we have to do CPR, I'm like, ugh really? We have to do this again? And it paid off this time," Hueser said.

"I would definitely say, 'Thank you very much. I really appreciate it,'" Kelly said.