Chrissy Teigen, John Legend open up about their 'complete and utter grief' over pregnancy loss

Chrissy Teigen and John Legend opened up about the loss of their son for the first time in an emotional interview.
WLS 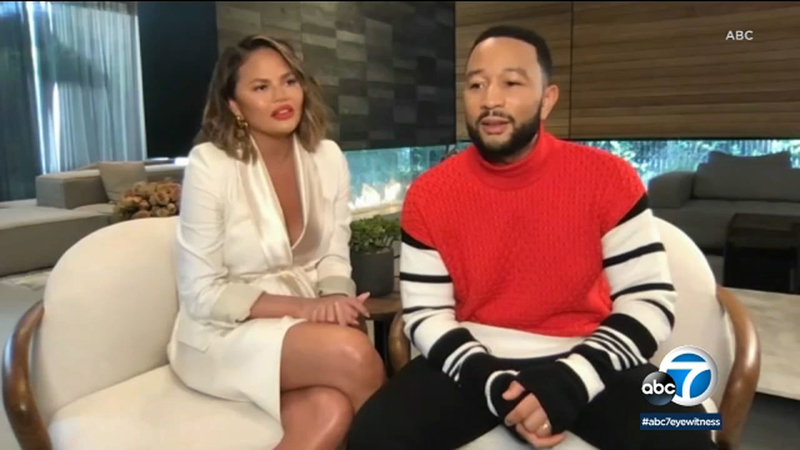 Chrissy Teigen, John Legend open up about their pregnancy loss

LOS ANGELES -- For the first time since one of the most devastating moments of their lives, Chrissy Teigen and John Legend opened up about the loss of their son.

They discussed their heartbreak and hope with ABC's Michael Strahan.

"I definitely give myself permission to have complete and utter grief," Teigen said. "Every day is so different. So when people ask me how I'm doing, I always say 'I'm OK today.'"

Chrissy Teigen has suffered a miscarriage following a recent hospitalization in Los Angeles.

Teigen's pregnancy with the couple's third child was plagued with complications, and when she was just 20 weeks along, they lost their son they named Jack.

They shared their heartbreak on social media, including poignant pictures taken during Jack's birth and death -- pictures that drew both praise and criticism.

"I don't care if you were offended or disgusted," Teigen said. "I understand it could be that way for people. It was designed for the people that were hurting and John was very uncomfortable taking them."

"She felt like, really, that one of the ways we would carry on Jack's memory was take pictures of that moment," Legend said. "I was worried, I was like, I don't want to commemorate this pain, but the crazy thing about having a miscarriage is you don't walk away with anything. You have this emptiness, and we wanted to take the photos so that we had something to remember it by."

Teigen and Legend say the outpouring of love from complete strangers has helped immensely.