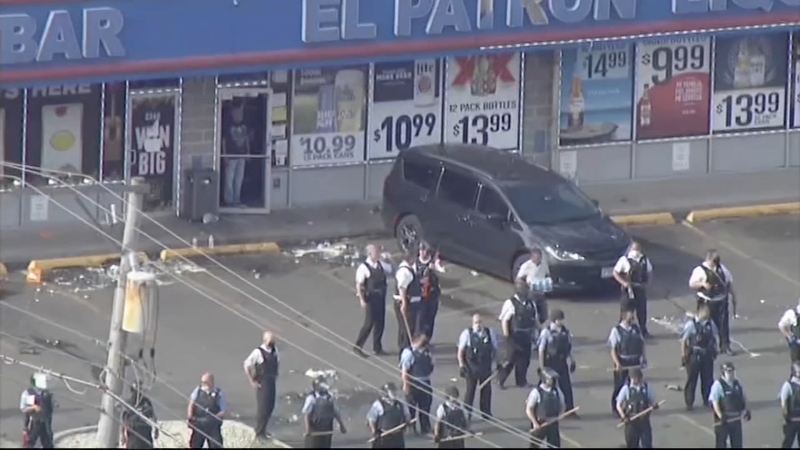 A large crowd started forming near 50th Street and Cermak Avenue in the late afternoon Monday and started moving toward 23rd Street and Cicero Avenue.

"There were a lot of rioters that just wanted to take advantage of this," said Ray Hanania. "A lot of them were standing right here on the street throwing rocks and bottles on the street as cars were coming by."

The Cicero Police Department said more than 100 local officers along with 120 state and county police officers were dispatched to protect residents and businesses. Two people, both men in their 20s, were found shot to death at different locations. Three suspects in one of the shooting have been taken into custody, police said.

Tuesday afternoon officials spoke out against the violence.

"When people come in here to protest, as long as it's nice, clean protest, we'll never interfere, but when they come here to riot, fight, break windows, shoot, we're not going to tolerate it," said Cicero Town President Larry Dominick.

Town officials announced a state of emergency Tuesday, with road closures and a curfew from 8 p.m. to 6 a.m.

Protesters returned to the streets Tuesday just steps from Village Hall, calling attention to what they say has been a growing tension between African American and Latino residents. Organizers said there were widespread reports that Latino gang members were allegedly protecting their neighborhoods and harassing black residents.

Cicero resident Shapearl Wells said un the wake of George Floyd's death, there should be unity., and she took her concerns to village official.

"I told them, why are you allowing them to patrol this area when you know these are the people to attack us?" she said.

Cicero officials sad they were unaware of those allegations.

Clean-up crews took to the streets not far from El Patron liquors at Cicero and Cermak, which was looted. With his business boarded up, the owner could only describe what happened as ignorance.