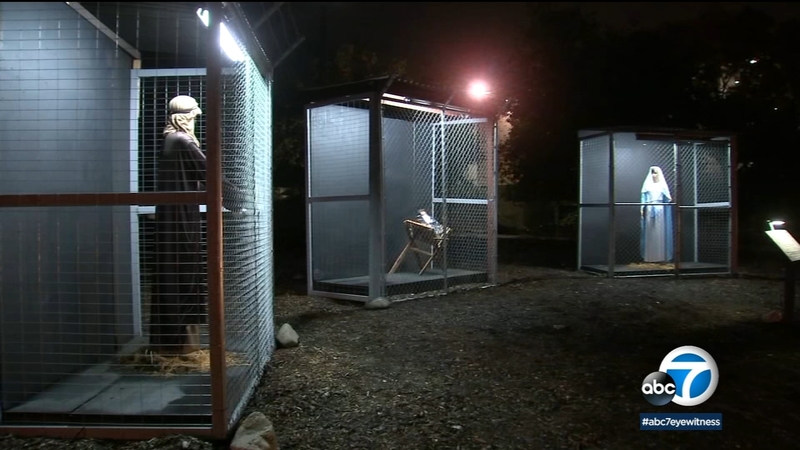 CLAREMONT, Calif. -- A Methodist church in Claremont, California is displaying a nativity scene depicting Jesus, Mary and Joseph as refugees in cages.

The church, Claremont United Methodist Church, is using the nativity scene to speak out against the Trump administration's separation policies at the U.S. southern border.

The display shows an infant Jesus wrapped in a silver mylar blanket. The holy family is separated, each in a cage with Jesus in between Joseph and Mary.

"We thought about the most famous refugee family in the world, the family of Jesus," said the Rev. Karen Clark Ristine of Claremont United Methodist Church.

Inside the church, Jesus, Mary and Joseph are reunited as a family.

"What if this family sought refuge in our country today?" Ristine said in a Facebook post. "Imagine Joseph and Mary separated at the border and Jesus no older than two taken from his mother and placed behind the fences of a Border Patrol detention center as more than 5,500 children have been the past three years. Jesus grew up to teach us kindness and mercy and a radical welcome of all people."

It is not the first time the church has used a nativity scene to speak out on societal issues, but this display has gone viral, sparking debate on social media and in the Claremont community.

"I appreciate it as a First Amendment issue. I respect the religiosity of it... but it's a leap," Rudy Barbee said.

"I love this. It's strong, it's powerful, it's graphic," said another woman while viewing the display.

A church in Los Feliz is also making a similar statement with its own display of a nativity scene with the holy family in cages. Residents there say it's the talk of the neighborhood, which is what church officials in Claremont wanted.

"It was nice for me to see that people wanted to talk with one another, even though they disagreed," Ristine said. "So, if this sparks a conversation that would be one good goal."
Report a correction or typo
Related topics:
religion & spiritualitysocietysocial mediau.s. & worldpresident donald trump
Copyright © 2022 WLS-TV. All Rights Reserved.
TOP STORIES
Chicago weather forecast includes snow into Monday | Live radar
Girl, 8, killed by stray bullet ID'd: ME
6 found dead inside Milwaukee home, authorities say
5 tax changes that can boost your refund this year
Family demands justice after 23-year-old woman found dead after date
COVID mandate draws protestors rallying against proof of vaccination
$45K raised for Bradley officer recovering from deadly hotel shooting
Show More
$6M worth of cocaine laced with fentanyl seized in Wisconsin
Chicago Weather: AM snow, mostly cloudy Monday
Woman killed in 'targeted ambush' at her birthday party in CA
Police lift SUV to rescue woman, 70, pinned underneath: VIDEO
US draws down Ukraine embassy presence as war fears mount
More TOP STORIES News