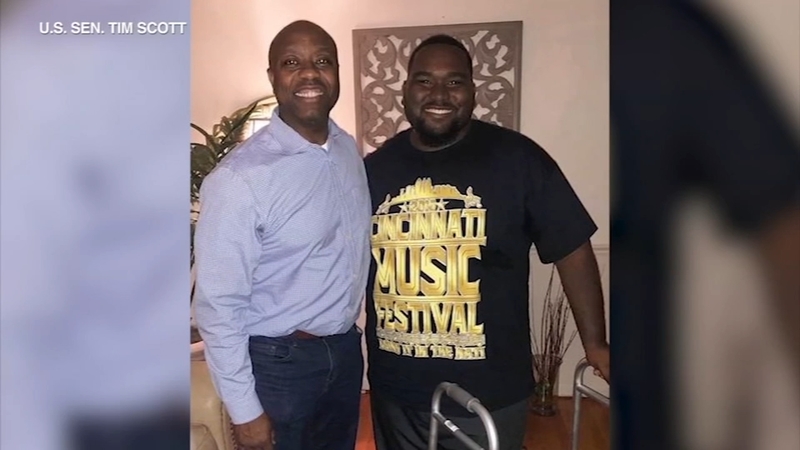 RIVERDALE, Ill. (WLS) -- A south suburban college student home from an internship on Capitol Hill was the unintended target of gun violence. He's vowing to not let the shooting keep him from his ultimate goals.

Just back from his dream summer in Washington, D.C., 23-year-old DeQuawn Bruce came to his uncle's Riverdale neighborhood to reconnect with family last Friday.

What happened has only propelled his future political ambitions

"While we were outside at my uncle's house. I just heard a loud bang. I get in the house and lay on the floor. In the exact moment I realized I got shot I wasn't in any pain here, it was just my leg," he said.

The bullet hit his pelvis, somehow avoiding any major organs and his niece.

"Had I moved in any way it would have hit her," said DeQuawn.

DeQuawn had been home just 10 days, and he was still riding the high of his paid summer internship working for South Carolina Senator Tim Scott.

The day he came home from the hospital, his mom Meloney Eddmonds got a call.

So DeQuawn, still in pain, sat his in his parents' living room and chatted with a U.S. Senator.

"He really cared about how I am," he said. "He talked to me about the plans he wants to put forth as far as making real change here."

As he sits at home, smiling, even in pain, his former boss tweeted about DeQuawn's optimism and his bright future.

What struck me the most was his optimism, strength and his family’s endless faith. DaQuawn has an exceptionally bright future and I cannot wait to see him recover and excel in everything he puts his mind to.https://t.co/kOW77Ba7LA