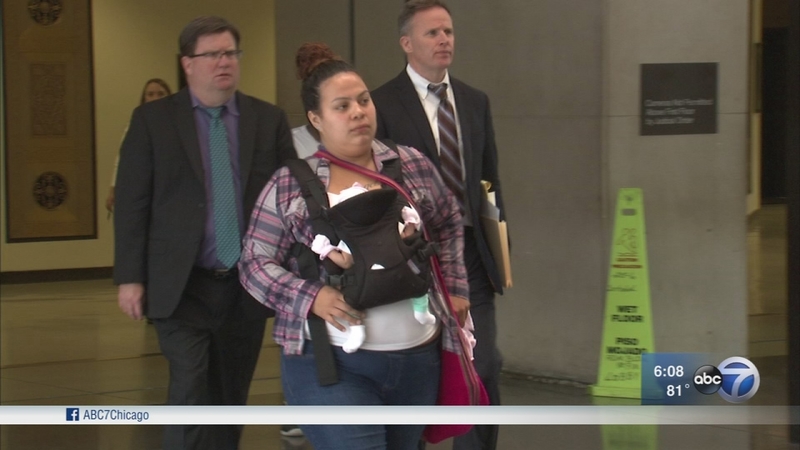 Woman held while pregnant on non-violent charge appears in court

CHICAGO (WLS) -- A Chicago woman who gave birth while in custody today appeared with her baby in front of the judge who had first ordered her locked up on a non-violent charge.

Cook County Judge Nicholas Ford was the subject of an I-Team report last week after he sent the woman, 7 months pregnant, to jail without bond.

Karen Padilla, 25, had been pulled over for a broken headlight last June. At that time Chicago police arrested her on an outstanding warrant for violating probation twice in a 2015 retail theft case.

Today Cook County prosecutors asked Judge Ford to dismiss one of the probation violations against Padilla, the charge that landed her in jail without bond and in a county delivery room while in custody.

Padilla was standing with her 3 week old daughter Anayah tucked into a front-pack as the judge loudly criticized prosecutors who had accused him of wrongdoing in his handling of the case.

Cook County First Assistant State's Attorney Eric Sussman accused Ford of violating the law and breaking the chief judge's order because Ford did not hold a bond review within 2 days and did not hold a bond hearing within 14 days. Ford defended his actions saying he could have held a hearing to have Padilla put in Illinois Department of Corrections custody because of her parole and traffic violations. The judge also threatened to hold Sussman in contempt of court.

Ford's no bond order could have resulted in Padilla staying in jail for 60 days, had the Sheriff's Department and State's Attorney's office not worked together to get her out on an I-bond after delivering her baby. As it was she spent 30 days in custody before prosecutors and the sheriff were informed of her situation and secured her release.

It was a different judge who had to order Padilla's release on Monday July 24th, according prosecutors because Judge Ford was already gone for the day at noon. In court on Monday Ford said he too would have likely issued an I-bond for Padilla that day and allowed her release.

Judge Ford said when he gave the pregnant Padilla no bond in June he wanted to hold her in custody until the traffic case was resolved and he recommended her as a candidate for the Women's Justice Program in the Cook County jail so that she would be well cared for while finishing out her pregnancy in custody.

After prosecutor Sussman asked Ford to drop the probation violation, the judge began yelling about the fact that Padilla has 3 traffic violations for driving with a revoked license and no insurance. According to the state's attorney that last violation was just filed today, ordered by the judge, for a traffic violation from June 21st, the day she was pulled over for the busted headlight and arrested on an outstanding warrant. Normally such a violation is ordered by-or at least signed off by-the state's attorney's office.

In an unusual suggestion for such a routine case, Judge Ford also mentioned possibly calling for a special prosecutor if the state doesn't pursue prosecution on the probation violations. Then Ford said he watched the I-Team report on Friday and saw Padilla commit a fourth violation by driving her car. The judge threatened to subpoena ABC7's video footage.

Then when prosecutor Sussman suggested Judge Ford recuse himself, Ford fired back that he has "a completely open mind about this case."

After the boisterous back and forth, the judge on Monday finally issued Padilla a $10,000 I-bond and said he would consider the request by prosecutors to drop the probation violation that originally landed her behind bars.

The I-Team's original report also stated that at Padilla's hearing in June, where she was 7 months pregnant, neither a prosecutor nor a public defender were present in court. While the transcript does not list attorneys for either side being present, on Monday the public defender said he was in court.