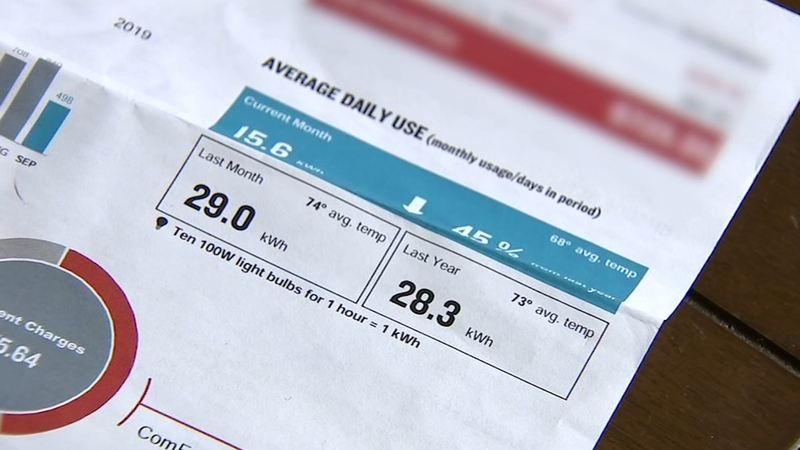 WESTCHESTER, Ill. (WLS) -- A woman in Westchester says her energy company is trying to make her pay her ex-husband's bill.

The woman says they divorced 14 years ago and she took his name off her account during the split. But still, she says ComEd wanted her to pay up or be sent to collections.

She says whether her ex-husband pays his bills or not shouldn't be any of her concern. But according to her, she says ComEd just wouldn't listen, so she called the I-Team for help.

Laurie Murray says she divorced her ex-husband back in 2005. It just didn't work out.

Including her ComEd bill. She says she called the energy company and made sure his name was taken off the account 14 years ago. But a few months ago, she says her ComEd bill was overcharged more than $365.

When she looked on the back, she says the extra charges came from her ex-husband's address.

"I've never seen his name in the last 14 years anywhere on this bill so it was so shocking," Murray said.

She says she called ComEd and was told her husband's name was listed as secondary on her account.

But Murray says the representative told her they don't get involved in family disputes, so she would have to either pay his delinquent bill, or face being sent to collections and be disconnected.

"Disconnection? I take that seriously. I don't want to not have power. My son has to do homework on WiFi," Murray said.

"What if someone says just call your ex-husband and make him pay it? I've already tried that and he says I'll pay it when I can. They need to go after him, not me."

The mother of four called the ABC7 I-Team for help. In a statement, ComEd told the I-Team, "We're committed to providing our customers the best possible service and know how inconvenienced they can be when a mistake like this happens. We've removed the charge from the customer's account and taken steps to ensure it won't happen again."

It's a huge relief for the mother, who says she was in no position to pay for a bill that wasn't hers. That's $365 she no longer has to worry about.

Now, when life changing events like a divorce happen, it's so important to check on your accounts to make sure everything is accurate.

You should also run a credit report to ensure everything is updated and that you're not being wrongfully charged. If you do spot an unfamiliar charge or account contact the company right away, just like Murray did.