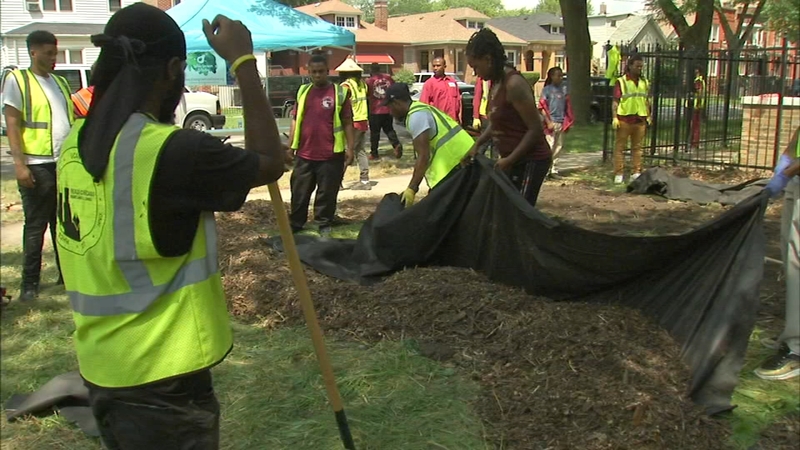 CHICAGO (WLS) -- A program to beautify vacant lots in Chicago is also giving men at risk of leading violent lives a chance at a new beginning.

The City of Chicago is teaming up with two non-profits to transform dozens of vacant lots into beautiful green spaces.

"All we have to do is landscape fabric on bottom and compost on top, that's not a lot," said one man.

With the help of several at risk young men one Woodlawn vacant lot is being transformed into a garden and park. It is one of 50 lots identified by the city in crime ridden neighborhoods that will get a makeover as part of a new pilot program called Grounds for Peace.

"We go out into these communities and clean up everything," said program participant Michael McCann.

McCann has been to prison twice in his 27 years and said he does not want to go back. He hopes this job training program through the non-profits Heartland Alliance and Urban Growers Collective will give him the tools to succeed.

"It's young men who are unemployed who really need a second chance and they are picked to be part of the program," said Laurell Sims with Urban Growers Collective.

For 18 months the men are trained to do landscaping work, grow food and create a beautiful space in their own neighborhoods.

"I've been here for 18 months, I love it here. It's inspiring," said program participant Tarique Fults.

"I didn't know anything about sunflowers until now," McCann admitted.

Besides giving the men a new lease on life, the city is hoping the 50 vacant lots chosen for the Grounds for Peace program will give neighborhoods a second chance as well.

The goal is to use beautification as a way to reduce crime, and once the garden grows, it will be up to neighbors to maintain the lots.

"I think it will be successful. I think young people will work at it because they want to see it beautified, they don't want it to look like it used to," said Woodlawn resident Sylvia Hyde.

The vacant lots chosen for beautification are all in the Woodlawn, Englewood and North Lawndale neighborhoods.