'Maximo' the titanosaur moves in to Field Museum

WLS
By Karen Jordan
CHICAGO (WLS) -- Construction of "Maximo," the newest dinosaur skeleton at the Field Museum, is underway this week.

Workers are installing a titanosaur skeleton cast of "Maximo," the largest dinosaur ever discovered, starting Wednesday through Friday.

His name is Spanish for "Maximum" and was named for its enormous size and Argentinian homeland. The bones were so big that a crane had to hoist part of it through the museum's front door.

Maximo the titanosaur is so big, a crane had to hoist part of it through the front door of the Field Museum.

When fully constructed, the structure will be 122 feet from head to tail, which is longer than two accordion CTA buses.

"It's gonna reach the balcony level," said Peter Makovicky, the dinosaur curator of the Field Museum.

Maximo will take over the spot where Sue the Tyrannosaurus Rex stood for the last 18 years.

Sue was dismantled in February, and has been reassembled in its own exhibit on the second floor.

"Imagining a herd of 70-ton animals is mindblowing," said Makovicky.

Maximo is actually be a cast of a titanosaur. The bones are fiberglass, allowing for an interactive exhibit.

But that's not the only new feature - new hanging gardens will have hundreds of live plants.

Museum visitors took it all in on Wednesday, enjoying the work in progress.

Annette Delgado asked her son, Diego, if he liked dinosaurs. Yes, he nodded.

The Defatta family though, visiting from Shreveport, Louisiana, had hoped to see Sue.

"A little disappointing, because i was telling the kids we could see some big dinosaur exhibits. but I understand things are changing and we're still excited to be here," said Jennifer Defatta.

Maximo will be fully assembled by Friday. After that, all the barriers and scaffolding will be removed by June 1, when you can walk under him and touch the titanosaur.
Report a correction or typo
Related topics:
community & eventsmuseum campuschicagomuseumsdinosaurs
Copyright © 2020 WLS-TV. All Rights Reserved.
RELATED 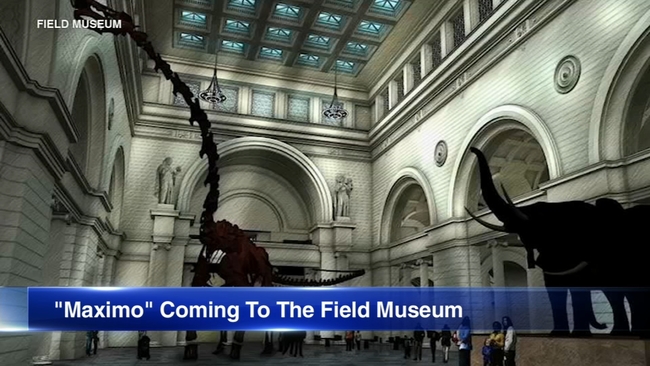