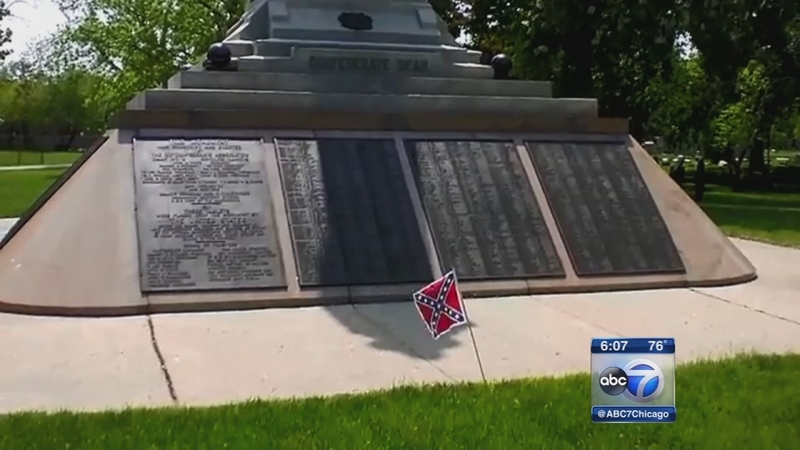 CHICAGO (WLS) -- Chicago may be nearly 200 miles from the Mason-Dixon line, but there is a remarkable Confederate presence here. The largest Confederate soldier burial ground in the north and a memorial to Confederate fighters are both on federal government land in a Chicago cemetery.

More than just an interesting piece of history, there are questions now about what happens to that memorial if the federal government bans Confederate symbols.

In the city's Greater Grand Crossing neighborhood nestled in Oak Woods Cemetery is a 46-foot-tall memorial to Confederate soldiers. A bronze rebel fighter atop the pillar looks down on a mass grave - said to be the largest in the western hemisphere - containing the remains of 6,229 Confederate soldiers. Names of the dead are on bronze plaques with cannons and stacked cannonballs marking the perimeter.

The soldiers buried here at what is called Confederate Mound had been held captive during the Civil War at Chicago's notorious Camp Douglas. Most of the southern fighters died of illness or starvation.

"Originally they were interred in the city cemetery, which was the southern end of Lincoln Park, but in 1867 that cemetery was being closed. They were moved to Oak Woods," Keller said.

Every year, members of the Illinois Sons of Confederate Soldiers hold a memorial event at the South Side gravesite.

But with the issue now enflaming Capitol Hill, some calling for a full review of all Confederate symbols on federal land - what happens to the Chicago Mound?

"The confederate soldiers were American soldiers and deserve some reasonable amount of honor," Keller said.

Both experts said even though the Confederate flag has no place at public buildings, the monument itself should remain. The National Cemetery Administration that manages Chicago's Confederate Memorial says they've received no complaints about it.

It's a different story in New Orleans as the mayor wants the city council there to declare four public Confederate monuments as public "nuisances" and taken down.