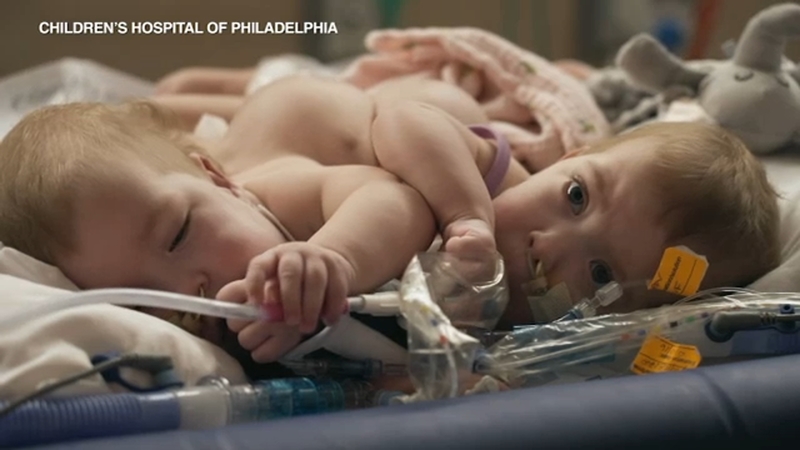 PHILADELPHIA (WLS) -- The Altobelli family is back in Chicago after Addison and Lilianna Altobelli - once conjoined twins - were successfully separated in October at Children's Hospital of Philadelphia.

The twins' parents, Dom and Maggie Altobelli, expressed gratitude in a video released by the hospital, which is also known as "CHOP."

The twins' story starts in the womb. An ultrasound in August of 2020 showed them connected at the abdomen and chest. The Altobellis decided to move to Philadelphia, focusing entirely on the pregnancy and what was to follow.

RELATED: Conjoined twins joined at the head are separated after 12-hour surgery

CHOP chronicled the couple's experience, including the delivery and the separation surgery, which included a team of two dozen medical specialists. They were born November 18, 2020.

"They were just so tiny and they were so beautiful and rosy. I just loved their little noises," their mother said.

The twins spent months in the hospital. Nearly 11 months later, in October 2021, it was time to separate them. The girls shared a liver, diaphragm, chest and abdominal wall. The surgery took 10 hours.
The Chicago couple saw Addy first, followed by Lily. The hospital's video shows the parents full of emotion, with tears welling in their eyes.

Within weeks, it was time for them to consider their move to Chicago. A family video in the hospital shows their excitement as the parents held their children.

"Hi, hi. We're a month away from going home. Yayyyy," the parents cheered, cradling each baby.

On December 1, 2021, the Altobellis finally flew home to Chicago. The girls stayed at Lurie Children's Hospital for two weeks. They were released from the hospital in time for Christmas, according to CHOP's news release.

A medical team at Lurie Children's Hospital will care for them. Their dad said it's not just a new chapter, it's a new book for each of them - Addy's book and Lily's book.