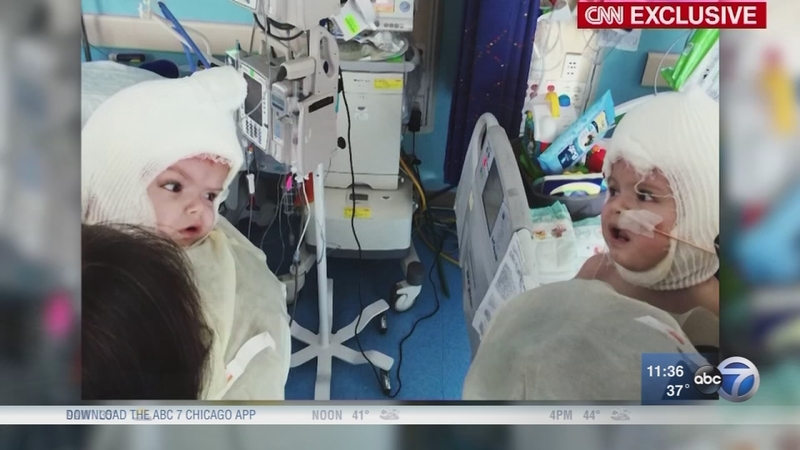 Conjoined twins see each other for first time

NEW YORK -- The white dressing covering Jadon's head is gently unwrapped, revealing a perfectly shaped head and a hairline with a natural curl.

It's the first time his parents have seen him without his bandages in four weeks. That's when he and his twin brother, Anias, born conjoined at the head, were separated in a 27-hour surgery at the Children's Hospital at Montifiore Medical Center in the Bronx.

Mother Nicole McDonald stands at his bedside in awe. Although new bandages will be put on, the sight is breathtaking. "It's the most amazing thing. I just can't even believe it," she says. "And look at his little hair. On top, it's growing in!"

His father, Christian McDonald, leans in. "Hey there, my man," he says, "You sure are handsome. Look at you. You look like a perfect little boy."

Jadon stares up at them, waving his right hand. He then taps the top of his head.

"How does it feel to be your own little boy?" Dad asks. Mom mimics her son, touching her own head and, imagining what he's thinking, asks, "Where's my brother?"

Anias rests in his bed across the room, near a window. His head remains wrapped. "You've been having a tougher go of it, but you're going to get through it," Dad tells him.

The boys, now 14 months old, are set to move to rehab shortly after Thanksgiving, about six weeks after the surgery to separate them. The world's previous record for recovery from such an operation, known as craniopagus surgery, was eight weeks. Many separated twins remain hospitalized for months.

Lead surgeon Dr. James Goodrich is checking on the twins in their 10th floor room on a rainy, unseasonably warm November afternoon. He's considered the leading expert in the world on twins conjoined at the head, and this was his seventh craniopagus operation. But it was also his most complicated: the boys' brains so intertwined, Goodrich considered stopping hours into the operation.

"Historically, this will be the fastest (recovery)," Goodrich says at Jadon's bedside.

"I didn't know that," Nicole responds. "So they were maybe your hardest set, but the fastest ones out of the hospital."

Goodrich nods. He attributes their remarkable recovery to one thing: "Just good kids."

The surgeon marvels at how well Jadon and Anias are doing. "I'm the least complaining person in this room," he says. "When they're ahead of schedule, it makes everyone happy."

Jadon is a bundle of energy -- "a crazy wild man," in his mother's words. He chews on wires. He reaches for faces. He locks onto a gaze and smiles. He tugs at the dressing when it's covering his head. It seems he can hardly be confined to his bed.

With twins joined at the head, Goodrich explains, there's always a dominant child where one child does double the work, that child's heart and lungs working overtime to keep both boys alive. In this case, Anias is the non-dominant child who has struggled with breathing and eating, even prior to the surgery. But Anias is progressing well, the doctors say, getting stronger since the surgery.

He often shrinks when people in scrubs approach, as if fearful he might have to undergo another surgery. Yet this day, Anias lets loose a smile as those in scrubs come near. "I like that he's starting to smile at other people," Nicole says. "He's starting to trust people."

He blinks his long lashes, stares up and tracks his mom with his deep brown eyes. He doesn't have the same range of motions as Jadon, but the surgical staff believes he will get there.

The boys' next stop will be a nearby rehabilitation center where they will undergo months of therapy. They've never crawled or lifted their heads like typical 1-year-olds -- let alone attempted to walk.

The surgery sets them back to infancy, Goodrich says, and it will take time for them to reach those milestones. Their mother, a pediatric physical therapist, has helped prepare them well for this next phase, Goodrich says.

Goodrich believes Jadon is ready for rehab now, but it's more beneficial for him to stay in the same room with his brother. "Separating the two," he says with a tinge of irony, "is probably not a good idea at this point."

A photograph captures the moment when the two boys saw each other for the first time in the hospital. They both have quizzical yet awe-inspiring looks on their faces, as if to say, "How's it going over there?"

Their room is situated in a corner, with windows facing Manhattan's majestic skyline. The walls are a pale blue, and the boys' names hang above their beds. A cutout of a cartoon lion designates Anias; a giraffe watches over Jadon.

We stick together through thick and thin

No matter what I do

I'm always stuck with you.

In this same room, the night before surgery, Jadon held a book in front of his face, and Anias reached up to tug on it. Jadon snatched it away and shoved at his brother's hands. And that's how the boys interacted: confined to the same bed at all times. Their parents could rarely pick them up or give one child their full attention. They had to stand over the boys, glancing back at forth at the two of them.

To see the boys now is stunning. Their cognitive functions are remarkable, considering the traumatic surgery they underwent. Little miracles, Nicole calls them.

Yet the past weeks have been grueling, for the boys and for their parents.

Jadon struggled with infections, fevers and breathing. The left side of his body was initially paralyzed, but he has since begun moving it. He had one seizure that seemed to come out of nowhere two weeks ago.

Both boys struggled with infections beneath their scalps, resulting in several trips to the operating room to clean out the wounds.

For Anias, doctors had to remove the skull cap they'd fashioned out of extra bone from the boys' conjoined skull. For now, his scalp is the only thing covering the top of his head. Recent skin grafts to help cover his scalp have left him in excruciating pain, although pain medication has helped to ease it.

Lead plastic surgeon Dr. Oren Tepper says Anias will eventually have to undergo more surgery to try to fashion a new skull cap out of bone from his hip or rib. But that is years down the road. He can survive fine as he is but will wear a protective helmet as a safety precaution, possibly for as long as seven years until the surgery. Both boys will be outfitted with helmets before going into rehab.

"It hasn't been perfect, but I think perfection in this case was never really an option," Tepper says.

For now, he says, both boys are "way ahead of schedule. They're really doing a lot better than I hoped. "The whole world has gotten behind these kids."

Anias also has suffered from multiple seizures, which are kept in check with medication. Goodrich says that's not uncommon after craniopagus surgery. "You can't cut the brain, disrupt it, and not have some consequences," he says.

The non-dominant child in these cases, he adds, "just takes longer" to recover.

Tepper says the thing that surprises him the most is that Anias, despite his setbacks, has gotten stronger since the surgery. "In a way, kind of staying conjoined and attached was inhibiting him and not letting his body recover and do the things he was capable of doing.

"But when they got separated," Tepper says, "it was time for him to fly on his own -- and he's doing just that."

Goodrich says he's most inspired by Jadon's spontaneity, how he tugs at stuff and reaches for people. "Nobody is forcing him. Nobody is telling him to do it. He's very spontaneous, and that to me is the most encouraging."

At Jadon's bedside with Nicole, Goodrich recalls the most difficult moment of the surgery, when he considered stopping because the boys' blood vessels were so intricately tied together.

"I was afraid by clamping those veins, if any one of them ruptured, that's how you lose a child," he says.

But he says a moment of opportunity arose -- "a little hole to work through." The doctor proceeded, making the correct move to separate the boys.

"(If we) made the wrong one, we wouldn't be having this conversation," he tells Nicole.