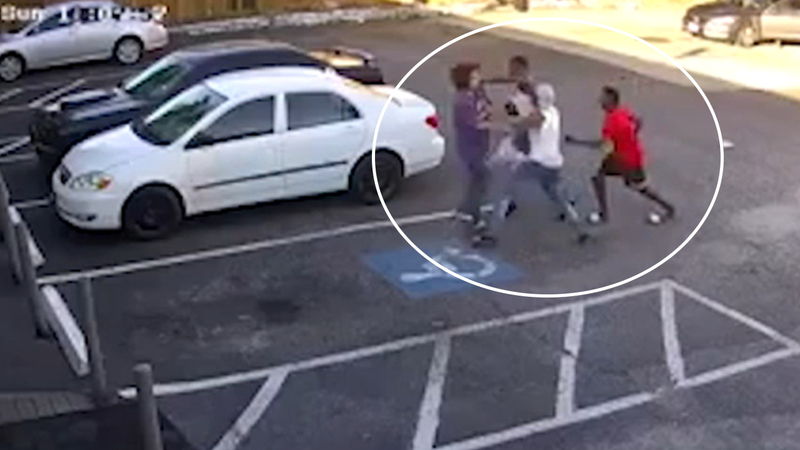 KLEIN, Texas -- WARNING: The video in the player above is graphic.

Investigators are searching for a group of suspects caught on video hitting and kicking a man after he left a convenience store in Texas.

It happened on Sunday around 7 p.m. at a Food Mart store in Klein.

The victim told deputies with the Harris County Sheriff's Office that he was waiting to buy some items when a group of up to six young men tried to cut in line.

The victim said one of the suspects kicked him in the face and said, 'Black lives matter, (expletive).'"

"I looked over and said, 'There's a line for a reason,'" the victim told WLS-TV's Houston affiliate KTRK. He and his girlfriend asked not to be identified out of fear for their safety.

Words were exchanged, the victim said. He claims the group mocked his hair and clothes.

After he paid and left, they met him in the parking lot and took turns kicking and punching him. The assault was caught on video.

The victim was carrying shopping bags, and said he just took it.

"I don't know what else I could do," he said. "The fifth one at the end came out of the store after purchasing goods, and came up to me and kicked me in the face and said, 'Black lives matter, (expletive).'"

The victim suffered a swollen lip, bruising and a cut near his eye. According to deputies, he refused to seek treatment.

"I really hope they're caught before someone else gets hurt," his girlfriend said. "I hope that the people take this and don't say, 'It's white against black.' I don't want this to be the statement. I want it to be, here's a man who was checking out and stood up for himself and he was targeted for that.'"

Anyone with information is asked to contact HCSO assault investigators at 713-274-9100 or Crime Stoppers.