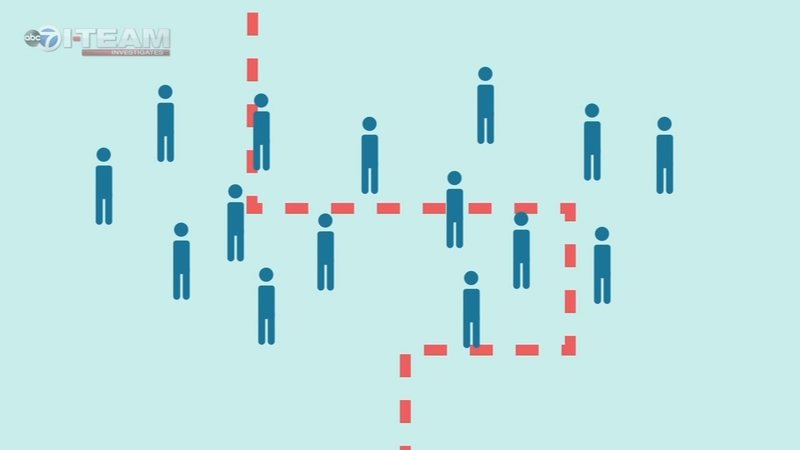 CHICAGO (WLS) -- Scientists leading the fight against the global pandemic say rapidly detecting and tracing COVID-19 infections is the only way to isolate infected people from those who are healthy or vulnerable. The I-Team is investigating a slow testing ramp-up in Illinois while the virus spreads unchecked, leaving sick people waiting for answers.

She said she fought for her life in March; feverish and unable to sleep or eat right for weeks, all the while waiting for results of a drive-thru COVID-19 test at Roseland Community Hospital.

"I just wanted the test results back to find out exactly what had happened and the waiting was just, just scary, because I know too many people that have passed. So, it was scary," said Chalmers.

"It was awful, it was awful," Tina Brown told the I-Team. She said she only got the results of a swab test at Roseland Community Hospital she took on April 3 after the I-Team called the hospital this week. She had later tested positive at Rush when her symptoms got worse and wants more effective testing in her hard-hit Auburn Gresham neighborhood.

"Every time I hear more testing, more tests. It makes me angry. We need more results. We want, so it's not testing more results. It doesn't make sense to me to keep testing, thousands and thousands of people and not getting the results. And the thing I think about is, are those people who were in line with me still alive?" said Brown.

Roseland Community Hospital tells the I-Team that the initial outside processing lab they used delayed test results by weeks so they've created their own process to get patients timely results.

Delayed results like these combined with a slow testing start in Illinois. At the end of March, as COVID-19 began to ravage the state, Governor JB Pritzker set a goal of 10,000 tests per day. But, the state wouldn't reach that mark until last week, more than three weeks later.

"It's coming through right now as a big wave. And we've gotten behind it," said Dr. Mark Dworkin, UIC School of Public Health. "This has really gotten out of control in terms of, you know, controlling the spread of this infection."

California, New York, Texas, and Florida all were consistently completing at least 10,000 tests per day before Illinois. Public health officials say that number still is a fraction of what could be necessary to adequately understand virus spread.

Contract tracing requires a huge number of pandemic detectives, and right now that army doesn't exist. Public health experts say at least 100,000 investigators will be needed. Some estimates go as high as 300,000. All of those professionals are will be in need of specialized training. The problem is, before COVID-19 set in, there were about 2,000 contact specialists in the U.S. and they were trained to track sexually transmitted diseases. In a briefing today attended by the I-Team, the executive director of the National Coalition of STD Directors put the challenge bluntly.

"If we can afford $25 billion or more, actually, to bail out for the airlines, we have certainly afford $6 billion to public health departments to ensure that our country can reopen safely," said David Harvey, Executive Director, National Coalition of STD Directors. "This is a war we can win. And our nation's best bet is this army of contact tracers."

"We absolutely are in the process of building this thing. It won't happen overnight," said Governor JB Pritzker.

Illinois and other states tonight are hiring contact tracers but exact current staffing or anticipated hiring numbers were not provided in response to I-Team questions. Late Thursday, Chicago Department of Public Health officials told the I-Team that "CDPH has been conducting contact tracing in an effort to contain the spread of COVID-19, with a focus on congregate settings, and moving forward is looking to increase our number of contact tracers by retraining current staff and hiring new ones." City officials did not provide specifics about the number of active contact tracers citywide.

"If we can get more control of this, then we could get back to every case, finding who are their most likely contacts and restricting them in some way so they can't go on and become that that next case that transfers yet again to somebody else," said Dr. Dworkin.

This is how contact tracing works: even while social distancing, we all come into contact with people on a neighborhood walk, at the grocery store, while picking up takeout food. With effective contact tracing, when someone tests positive for COVID-19 a case investigator will talk to the infected person and try to identify everyone they had close contact with so they can be tested and isolated if necessary.

"Contact tracing is a novel idea because this is at one time in history when we've ever been able to essentially reach everyone all at once," said Jeremy Hajek, Illinois Tech Industry Associate Professor

Now, both Google and Apple are working on new contact tracing technology that would allow you to opt-in to tracking through your phone's Bluetooth connection. Anyone you come in contact with would be anonymously logged by your phone for potential tracing.

"It can notify you saying, yes, you may have passed someone or been in contact with someone who self-reported that they have the coronavirus. And this can be done securely without identifying you and the information, cannot be traced back to you directly," said Hajek.