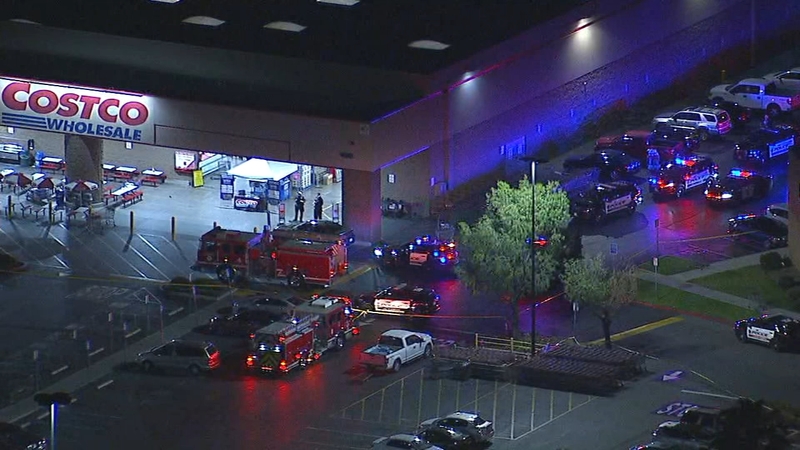 CORONA, Calif. -- A shooting at a Costco Wholesale store in Corona, California, has left one person dead and three others, including an off-duty officer, wounded on Friday. The alleged gunman is in custody, police say.

Multiple witnesses said they heard gunshots around 7:45 p.m. while shopping at the location, which is at 480 N. McKinley Street. They said there was chaos after shots were fired. People ran to escape, but the doors were locked, which added to the panic.

"I heard pop, pop, pop, and then look, she almost broke her hand trying to open the emergency doors," said one witness, who added that he was right by the shooting when it occurred inside the store.

Another shopper captured the mayhem that was heard in the aftermath of the shooting.

Footage from AIR7 HD showed the large police presence at the warehouse store after it was evacuated. Following the law enforcement response, Corona police confirmed the shooting incident was stabilized, and there was no threat to the public.

The shooting incident at the Costco in Corona has been stabilized. There is no apparent threat to our community from any outstanding persons. We will release more information as we work to confirm the facts. #coronacostcoshooting

Corona police confirmed four people were found injured inside the Costco. One died from his injuries at the scene, while the three others - including the wounded off-duty officer from another agency - were taken to local hospitals in unknown condition. Officials had not yet released an update on the victims as of Saturday morning.

The person who was shot and killed in the deadly confrontation was a male, but his identity is not known.

Authorities initially thought they were dealing with an active shooter but quickly determined that was not the case.

Investigators said it all began with an argument inside the business, and then moments later, witnesses heard several gunshots.

"There was apparently an argument inside, some type of argument that turned into a gunshot," said Jeff Edwards from Corona PD. "From my understanding, it is not domestic."

Police said the gunman is in custody. He complained of an injury and was taken to a hospital for treatment.
An investigation is ongoing.