WLS
By Cate Cauguiran and Rob Elgas
BOURBONNAIS, Ill. (WLS) -- A man from Bourbonnais is hospitalized, battling COVID-19 after he was sent home from the emergency room twice.

Tom Buttaccio said one of his colleagues was also sent home from the emergency room and later died from the virus.

His family is clinging to their faith as the father of three battles COVID-19, congestive heart failure, pneumonia and, like many others, difficulty breathing. They said the worst part is that they can't physically be there with him.

"We can't see him. We can't encourage him by, you know, a kiss or a smile," said Betty Buttaccio, wife.

Tom Buttaccio has been hospitalized at Riverside Medical Center for about a week and a half. His family waits every day for a single call to update them on his condition.

"For me it's having to trust God in this situation because I can't be there, and that is the struggle," Betty said.

Tom's family said earlier this month he was at his Enterprise job, transporting vehicles with colleagues shortly before he and others in the car got sick.

One of those colleagues, Yousef Quran of Crete, died from COVID-19 just days ago.

"I just broke down and sobbed," Betty said. "It broke my heart."

Just like Yousef, Tom made multiple trips to the ER before doctors admitted him. In the meantime his daughter-in-law, who is a former health care professional, said they were pleading with doctors to try experimental medications.

"So a whole week had gone by of us begging for those medications," Jenny Buttaccio said. "We really were desperately trying to prevent hospitalization."

Tom tested positive for COVID-19 and days later was officially admitted. By then he could barely breathe.

"The ER doctor said, 'Thank God you brought him when you did because he's already in congestive heart failure,'" Betty said.

Tom's doctors told the family he may be there for weeks more. His family are putting their faith in his health care workers and God.

"It's very hard because you're trying to be encouraging by saying, 'Honey hang in there, everybody's praying. We love you,'" said Betty.

Tom's family said around the same time he tested positive he was laid off from his job at Enterprise, adding one more layer of difficulty to this battle. They also said he is beginning to show some signs of his improvement.

Betty said though she was not officially tested, she was told by her doctors she is presumptive positive.

COVID-19 patients hospitalized in the Chicago area are fighting to recover from the novel coronavirus.

Other positive COVID-19 patients in the Chicago area are also trying to recover. Windy City Live's Ryan Chiaverini spoke with Chris Duell, 43, who is hospitalized in Libertyville. Like Buttaccio, he can't see his family but offered a message to them.

"I love them all very much and I miss you and you know Daddy is strong. I'll get past this and we'll get back to seeing you real soon," he said.
Report a correction or typo
Related topics:
health & fitnessbourbonnaiscoronaviruscoronavirus illinoishospitals
Copyright © 2021 WLS-TV. All Rights Reserved.
CORONAVIRUS ILLINOIS 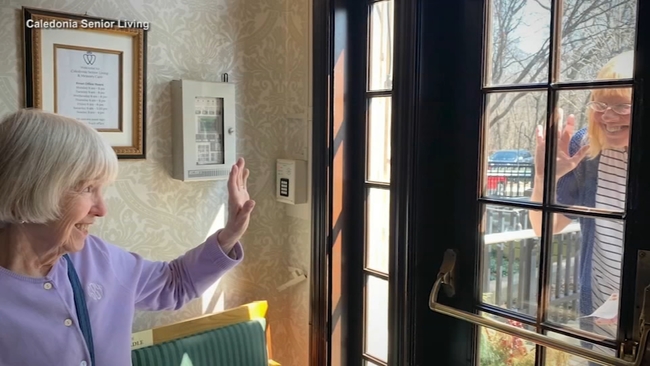