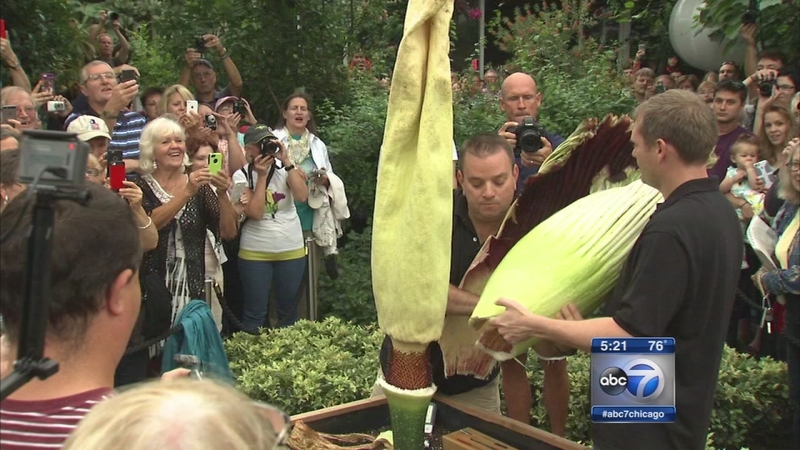 GLENCOE, Ill. (WLS) -- Scientists and visitors at the Chicago Botanic Garden have been waiting all week for the rare, foul smelling corpse flower nicknamed "Spike" to bloom and Sunday it needed some help.

To say Spike has been unpredictable is an understatement. Two hundred fifty thousand people have been closely watching the live web cam pointed at the very rare corpse flower inside the greenhouse at the Botanic Garden.

They have been waiting for it to bloom and release its infamous stench, but Spike wasn't giving in. The rare flower didn't have enough energy and was beginning to wilt.

So, the team at Botanic Garden took matters into their own hands and cut Spike open up for all to see.

For some, it was as exciting as they thought.

"Even though it was sad but it was wonderful to be part of this," said Janet Nutting.

Even for the experts, the anticipation of waiting for the rare plant to open up was a rare treat.

"It's the first one we've had this close in Chicagoland, so we were hoping that it would open up but it kind of stalled out," said conservation scientist Shannon Still.

That didn't stop close to 60,000 people from flocking to see, draw, and take pictures with Spike. It has become a sensation here since its introduction August 6.

"Once in a lifetime opportunity to see something like that," Natasha Cherco said. " i've been following Spike for a long time."

Spike did not release a smell, although if you got close enough, there was a faint scent that explained the plants name.

The plant will remain on display for about a week, and scientists will watch for pollination. Then it will wilt, and gone will be the plant that attracted so many curious minds.