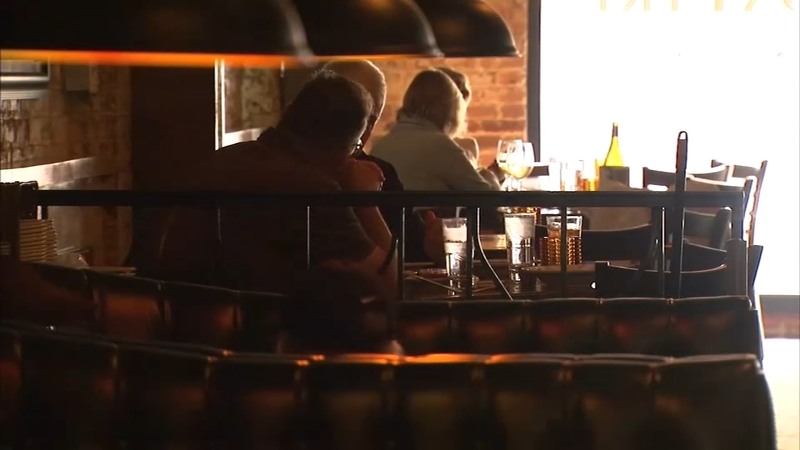 CHICAGO (WLS) -- New COVID-19 restrictions on indoor dining from Governor Pritzker in effect in much of the Chicago area have drawn pushback from suburban mayors and restaurant owners.

The restrictions are now in effect for suburban Cook County as well as DuPage, Kane, Kankakee and Will counties. They go into effect in Chicago on Friday and Lake and McHenry counties on Saturday.

A full list of the new COVID-19 mitigation measures is included at the bottom of this article.

Following a Kane County decision allowing Geneva's FoxFire to continue operating, lawsuits have now been filed on behalf of several restaurants across the area. The largest was filed Thursday in McHenry County on behalf of 37 establishments there.

The suits challenge the governor's emergency powers, which they say expired 30 days after the initial disaster proclamation.

The mayors of Orland Park, Libertyville, Itasca, Morton Grove and Aurora have asked Governor Pritzker to reconsider the restrictions.

"A majority of us small town mayors feel that it is vital to keep restaurants open," said Morton Grove Mayor Dan DiMaria.

Facing another shutdown that could cause permanent closures, restaurant and bar owners are demanding public officials prove they're causing the spike in COVID-19 cases.

"The order allows a health club where people are sweating and breathing heavily to remain open," said Libertyville Mayor Terry Weppler. "It allows groups of 25 people to get together and obviously they're together they can eat, drink. So just targeting restaurants to me is kind of arbitrary."

Skeptical of the governor's mitigation plan, Mayor Weppler says starting this weekend, his village will not penalize restaurants for continuing to serve people indoors

"It is high time for governor to share the data he is using," Mayor Pekau said. Stop hiding it."

There are over 150 restaurants in southwest suburban Orland Park that were supposed to shut down indoor dining rooms last week. And many did. But others continue to quietly operate, unwilling to submit to Gov. Pritzker's mitigation orders for the region.

"That's why we're here partly," restaurant patron Judy Crowhurst said. "Partly we want lunch, but partly just to support them, because I can't imagine if my living was taken away like that."

Going a step further, Mayor Pekau pointed to publicly available data for DuPage County which shows that since March, a full 3/4 of outbreaks have happened in long-term care and nursing facilities, while only 1.5% can be traced back to restaurants. The Illinois Department of Health doesn't publish anything nearly as detailed for the state.

"If you had all of that information, why would you not share it? Because you would have people like me and other mayors, and Mayor Lightfoot now, and other mayors throughout the region say, 'Ok, we see the data now. We don't like it, but we understand the decision-making,'" Pekau said. "But if you don't give us any information, and you do it in secret, that doesn't work for us."

Not only will they continue to look the other way, the Orland Park mayor said next week they will approve a Dining Orland program which will offer restaurant patrons a $10 gift card for every $100 they spend at local restaurants.

The calls for transparency have come from Aurora as well.

Tredwell Coffee owner Chad Dawes has already been operating under the mitigation plan for several days, immediately feeling the impact. Revenue has plunged 40% and is continuing to trickle down.

"It's been rainy, it's been kind of just dreary to be out on the river out on the patio and if I can't have anybody inside then all my businesses carry out and take away," Dawes said.

Aurora's Mayor Richard Irvin has not gone as far as waving off the indoor service restrictions, but sent Governor Pritzker a letter saying he too does not see local health data backing up the governor's claim that restaurants and bars are COVID-19 hot spots.

"There are people who across the state don't want to do what's right, don't want to stand up for the health and safety of their residents but instead stand for a loud constituency," Pritzker said.

"My job, my livelihood, my staff's livelihood, we don't know what's going to happen," said Tom Garrity, owner of The Toadstool Pub.

"I think we all kind of knew it was coming, but it stinks," said Darcy Mosconi, owner of Sandy's Diner. "I just don't think it's fair."

But the governor pointed to the Region 9 numbers with three straight days of a test positivity rate above 8-percent and COVID-related hospitalizations five times higher than in June.

"Things are bad in Region 9 and getting worse," Governor Pritzker said.

But are restaurants to blame?

"I'm not sure the governor can prove that being in a restaurant creates, is increasing the risk, but our restaurants have taken the measures that they need to take," Mayor DiMaria said. "They've scaled back."

"To the extent that we can limit interactions in places where we know there's spread, that's what we're trying to do, especially in the midst of a COVID storm that's hit the state and the nation," Governor Pritzker said.

Governor Pritzker on Thursday provided an update on a program to help struggling businesses.

-No indoor service
-All outside bar service closes at 11:00 p.m.
-All bar patrons should be seated at tables outside
-No ordering, seating, or congregating at bar (bar stools should be removed)
-Tables should be 6 feet apart
-No standing or congregating indoors or outdoors while waiting for a table or exiting
-No dancing or standing indoors
-Reservations required for each party
-No seating of multiple parties at one table

-No indoor dining or bar service
-All outdoor dining closes at 11:00 p.m.
-Outside dining tables should be 6 feet apart
-No standing or congregating indoors or outdoors while waiting for a table or exiting
-Reservations required for each party
-No seating of multiple parties at one table