Could the 'coywolf' hybrid come to Chicago? 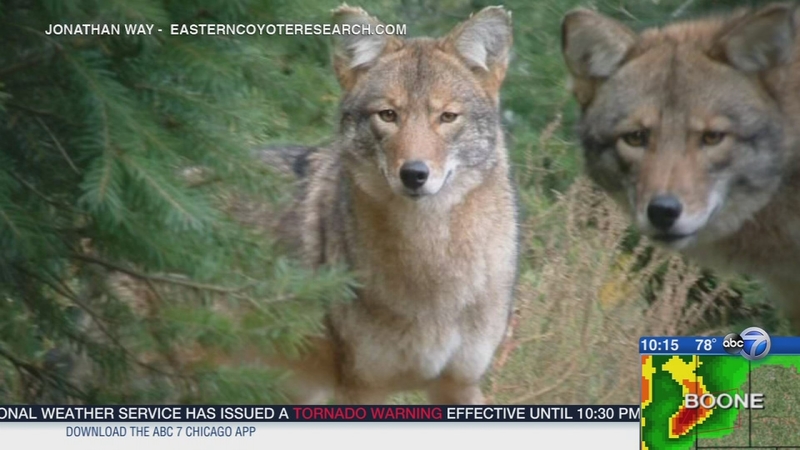 Could the 'coywolf' hybrid come to Chicago?

CHICAGO (WLS) -- In Chicago and the suburbs, ecologists say there is a 100 percent chance you're living near coyotes. This time of year they can get aggressive because they're raising pups and when ABC 7 learned of a "coywolf," we asked the experts if they could come to the city.

Some coyote pups are growing up in the suburbs. Like their parents, they'll walk our streets and roam our yards. Thousands of coyotes are thriving in Chicago, a peaceful co-existence, but not always.

"My patient that we lost, she was safe in her yard for nine years," said Kathleen Heneghan, veterinarian at Elmwood-Grove Animal Hospital. "What changed this year?"

Daisy lived happily in River Forest for nearly a decade. In a blur she was dead.

"It was about 6:45 on a Friday night and we got a frantic call from her family. She was, she was gone," Heneghan said.

Two weeks ago in Hoffman Estates, Tessi survived a brutal attack. Her injuries are still healing.

Heneghan is seeing a spike in coyote dog attacks.

"In most these cases these people were several feet away. These coyotes are approaching people when they're walking their dog. In broad daylight," she said.

"We need to be looking at new ways to surprise them. Because waving the hands and yelling still works with some of them. But some have actually gone beyond that," he said.

As coyotes adapt, their canine relative, the gray wolf, is doing the same.

"The gray wolf is already north of us. And in fact, Wisconsin has a thriving population," said Ohio State University professor Stan Ghert.

Gehrt has studied urban coyotes in Chicago for nearly 20 years. He said that a gray wolf could find a mate here with a coyote.

"It could find a mate and we have had an occasional wolf pass through," he said.

But Gehrt said wolves in Illinois are rare.

One was found near Morris that was hit by a car and killed last year. One of two found in Illinois in all of 2016.

"We've had a couple that have actually gone through around the Chicago area and ended up in eastern and central Indiana," Ghert said.

The gray wolf is not easy to identify when compared to a coyote. Its ears are smaller and it's also much bigger, weighing up to 100 pounds. And wolves are not fond of coyotes or humans.

"Actually wolves are more timid and keep a greater distance from people than coyotes do," said Ghert.

"When it has happened, out in New England and further east, those hybrids have acted more like coyotes and not wolves," said Thompson.

Once endangered, the gray wolf thrives in northern Wisconsin. Open hunting season trims the population. But males do wander, sometimes hundreds of miles looking for a mate.

But time changes behavior. The urban coyote is a perfect example of adaptation.

"When you have healthy populations of wolves and coyotes then it's actually very rare for them to hybridize, to mate. It's only when one species is very rare and they don't have a lot of selection that's when you tend to get the hybridization and that's what happened farther to the northeast," Ghert said.

Gehrt said genetic studies currently show no hybridization of coyotes in Chicago. And most wolves who get this far south die because they are either shot or run over.